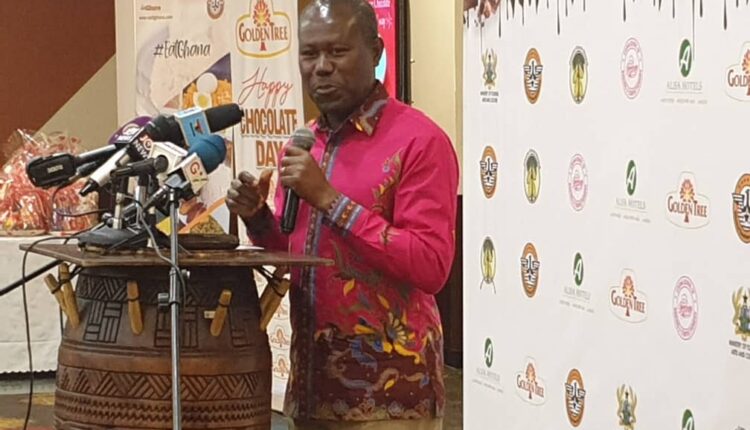 The Chief Executive of the Ghana Cocoa Board (COCOBOD), Joseph Boahen Aidoo has called on hospitality partners in the country to include cocoa in the preparation of their meals and add cocoa dishes to their menus.

Promoting daily cocoa consumption, Mr Aidoo noted that, cocoa contains high antioxidants which help to fight and remove free radicals from the human body. It also has several other health and nutritional benefits which must be promoted.

Mr Boahen Aidoo made this appeal in a statement he delivered at Alisa Hotel, during the climax of the 2020 National Chocolate Day celebration, on February 14, in Accra.

He touched on the importance of cocoa to the national economy. Proceeds from its sale have funded and continue to fund several national projects. The cocoa industry, he further added, has employed many individuals, and is the backbone of the local economies of many parts of the country, as such, increases in the patronage of local chocolate and other cocoa products translate directly into supporting local and national development.

The COCOBOD boss went on to encourage the adoption of a culture of cocoa consumption in Ghana, and not just its production. This he said can be achieved by making cocoa the default beverage at homes and offices. Breaks during seminars should become cocoa breaks. Cocoa should be served at meetings and various forms of cocoa foods, drinks and smoothies should become regular menu items at restaurants and cafes, he said.

He called on everyone present at the occasion to become good ambassadors of cocoa and to help add value to the crop through processing into various consumable products for the local market and beyond.

Mrs. Barbara Oteng Gyasi, the Minister for Tourism Arts and Culture, in her statement also called on entrepreneurs to explore more positive ways to ensure the promotion of chocolate in Ghana.

She went on to pay tribute to the late Jake Obestebi Lamptey, through whose initiative the 14th of February in Ghana became National Chocolate Day.

The day has since become a very important event on the nation’s tourism calendar and ever more crucial to the effort to promote the consumption of locally produced chocolate.

This year’s celebration was themed; “My Chocolate Experience: My Holistic Well-Being”. The public was encouraged to share chocolates as ‘Gifts of Love’ during the celebration. Ahead of today’s climaxing event, there was a cocoa art competition and a social media campaign for the public to share their cocoa experiences.

The Managing Director of the Cocoa Processing Company (CPC), Nana Agyenim Boateng, on his part, said his outfit has introduced 19 new and improved cocoa products with very attractive packaging.

The products include dark chocolates ranging from 70%, 80% and 90% cocoa solids. The aim is to satisfy loyal consumers and to boost cocoa consumption.

Awards were presented to individuals who distinguished themselves and in diverse ways contributed to the promotion of chocolate through videos, pictures and sign writings.

This year’s National Chocolate Day was organised by the Ghana Tourism Authority in collaboration with COCOBOD, the Cocoa Processing Company and Niche Cocoa.