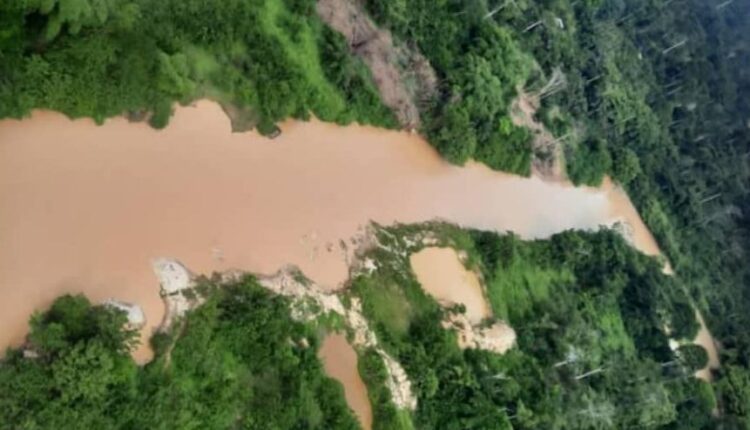 Civil society activists operating within Ghana’s cocoa sector have blown the alarm on the continuous destruction of cocoa farmlands and water sources by illegal gold miners.

A new investigative video footage on the state of water sources released to the media reveals that despite a government-sponsored military campaign – Operation Halt – to end illegal mining, the practice continues unabated.

“We stand here today with fresh evidence from the field to reveal the level of impunity in the fight against illegal mining and show the rate of forest lost to illegal galamsey, destruction of precious and critical water sources for forest fringe communities and how the illegal miners have left huge trails of mud and toxic waste such as deadly mercury, poisoning water sources used by our local and vulnerable communities”, Anthony Morrison, chairman of the Alliance of CSOs in Agriculture, said.

A cocoa farmer and chairman of the Juaboso-Bia Landscape Management Board, Elijah Kofi Owusu, decried the alarming rate at which cocoa farmers were losing their investment to illegal miners.

He recounted how some cocoa farmers in the Juaboso-Bia area are losing as much as 20 – 40 acres of their farmlands and thriving cocoa farms to overnight activities of illegal mining.

Owusu, a sexagenarian, is extremely worried there would be nothing left to pass on to his children and generations after them if the situation is not arrested immediately.

He regretted that reports to local government authorities and the agents of Ghana Cocoa Board have yielded no results.

The twin communities of Juaboso and Bia, the epicentre of the galamsey activities in the Western North Region, are also a leading hub of cocoa bean production in Ghana.

Farmers and civil society actors in the cocoa space are convinced the precarious situation on the field begs the government’s commitment to dealing with the crisis.

The Ghana Civil-society Cocoa Platform (GCCP), the General Agriculture Workers Union (GAWU), the Chamber of Agribusiness Ghana and the Landscape Management Board of Juaboso-Bia jointly addressing the media, in Accra, pointed to impunity perpetrated by some influential business persons, traditional leaders, politicians and security capos.

“Local people, like the people in Sefwi, face unprecedented threats while trying to protect their land and hence the planet for all of us”, Morrison noted, alleging that “interactions with the communities reveal a state of apathy and a culture of silence.”

He described the government’s unilateral campaign to fight illegal mining as bound to fail, explaining a sustainable solution to wipe the canker must involve the local people.

Aside from Juaboso, other communities like Asempaneye, Mantukwa, Kwasiadaikrom among others in the Juaboso District are said to be facing an active scourge of illegal mining.

Sylvester Yaw Asiamah, a farmer and a member of the Landscape Management Board of Juaboso-Bia, said some affected farmers are left devastated having totally lost their livelihoods.

According to Asiamah, many of his colleague farmers have observed the leaves on their cocoa trees withering after applying insecticides mixed with the polluted water to the farms.

He also noted another worrying situation in the communities is the scarcity of potable water, following the pollution of the Bia River, a key water source for inhabitants.

The Bia River like the Ankobra and Prah are all reported to be heavily contaminated with cyanide and mercury used by illegal miners to extract gold.

“We are talking about people who don’t do galamsey in their areas, but they use water. They drink the water and they use it for fishing and eat the fish inside the water. Imagine this water being contaminated by galamsey water, it means mercury enters the water, the fish will get contaminated by the mercury and you and I sitting in Accra…will consumer them”, Andrews Addoquaye Tagoe, deputy general secretary of GAWU said.

Tagoe called on health authorities to begin screening people in the communities for possible illnesses resulting from consuming the contaminated water and its products.

Nana Yaw Reuben, the producer of the footage, challenged the government to name, shame and prosecute the sponsors of illegal mining activities, a position shared by the alliance.

“We want the government to demonstrate that indeed no subject or person is above the law. Government should bring all known politicians, traditional authorities, policymakers, businesswomen and men and influential people involved in the business of illegal mining to scrutiny and prosecution”, Anthony Morrison charged.