It’s a crucial time of the year for farmers in top producers Ivory Coast and Ghana as they prepare for the next harvest.

Farmers in the top two cocoa growers are upbeat about the next harvest after heavy rains in recent weeks helped support crop development.

It’s an important time of the year for farmers in Ivory Coast and Ghana—which together account for more than 60% of global cocoa production—as they prepare for the bigger of two annual harvests. The so-called main crop starts in October and runs through March in No. 1 grower Ivory Coast.

Here’s where things stand so far:

Conditions have been favorable for crops and are likely to mostly stay that way, said Drew Lerner, President of World Weather Inc.

While rains have subsided for now, the wet season will return next month until the harvest starts, and then it’s “back to the more seasonally dry time again to support the harvest,” he said.

Either way, “it should be an average crop with maybe a slight bias towards better than average,” said Lerner.

Still, there’s a threat that drier weather in August may have a negative effect on crops, according to Giacomo Masato, a meteorologist at Marex Spectron Ltd. While an earlier threat of El Nino has subsided, there’s an outlook for “cooler sea surface temperatures over the Gulf of Guinea” that also results in drier conditions, he said.

Cocoa futures have dropped on signs of ample supply

Ivory Coast and Ghana’s new plan to introduce a premium on the sale of their beans will probably result in increased cocoa planting, boosting supply over time, according to Edward George, an independent cocoa expert.

Cocoa in New York for December delivery dropped as much as 0.6% to $2,232 per ton on Tuesday, the lowest since March 22.

Farmers in Ivory Coast are positive about the prospects for the upcoming harvest. Cocoa plantations look good, with lots of pods on the trees, said Moussa Tiendre, a grower in the southwestern town of Grabo.

Ivory Coast is on track to produce a record 2.3 million tons of cocoa in the current season that ends in September, according to the average estimate from three traders surveyed by Bloomberg. 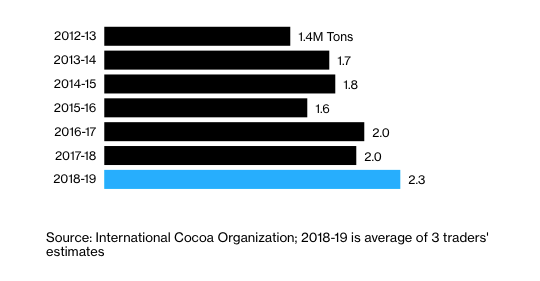 For the 2019-20 season, the crop will probably decline about 10% from this year’s bumper level but still remain historically high, at about 2 million tons, according to Charlie Sargeant, a broker at Volcap Trading Partners Ltd.

“It’s very dependent on rains, obviously a little bit of dryness is not going to help,” he said.

The second-largest producer is emerging from a difficult 2018-19 season, after an unusually severe outbreak of swollen shoot disease destroyed crops. The virus, which can deform cocoa pods and reduce yields, forced the cocoa regulator to twice reduce its estimate for the annual harvest, most recently to 800,000 tons, people familiar with the matter said previously.

For the upcoming season, the Ghana Cocoa Board is targeting a harvest of 950,000 tons, while Volcap’s Sargeant estimates it could reach about 960,000 tons.

Farmers are also optimistic about the outlook. There’s been a good mix of rain and sunshine in the last month, said Alex Addae, who farms in Yakasi, on Ghana’s southwestern border with Ivory Coast.

“The crop is good and farmers are upbeat about the new season despite vast stretches of cocoa lands being hewn down because of the swollen shoot virus disease,” he said. “We are confident that the coming season will be more fruitful.”

“Number 2 Ghana’s soil appears to have enough moisture, but an improvement in dry weather over this month will be critical for the upcoming main harvest in Ivory Coast. The main crop in smaller grower Nigeria could also be threatened due to heavy rains” and humidity, which affects bean quality.

A cocoa shortfall is likely in the 2019-20 season, starting Oct. 1, amid supply risks due to unfavorable weather in some key regions across Western Africa, the region from where more than 70% of global beans are sourced, and still-strong global demand for chocolate (and as a result cocoa) particularly in emerging markets, despite deceleration from a high level.”

In other West African producers: