The International Cocoa Organisation plays a significant role in some of the sector’s key markets.

It is now two years since the International Cocoa Organisation (ICCO) headquarters moved from London to Abidjan, in Ivory Coast in July 2017, which has been describe by the organisation as a “turning point that will bear fruit in the years to come.”

With Africa accounting for almost 76% of world cocoa output, according to ICCO data, experts have argued it makes sense to have the headquarters located closer to production to ensure better information flows to and from producers.

“The headquarters are now closer to the countries producing the world’s cocoa that include in Côte d’Ivoire, Ghana, Nigeria, Cameroon and Togo,” ICCO consultant, information and media, Michael Segal, told Confectionery Production, noting how its officials would be better placed to make African grassroots contacts.

“As a result, we will have better intelligence about the dynamics of cocoa supply, which will feed into the statistics and market information that we prepare for our member countries.”
Having the right information does help the ICCO in its core mandate, as under the 2010 International Cocoa Agreement, to supply accurate market information and boost cocoa quality and sustainability.

They are supported by an administration and finance division that has eight employees and an economics and statistics division that employs nine members. Of all staff, Mr Segal said: “Roughly half of the staff is employed under local contracts, and the remainder under international contracts.”

This improved analysis feeds into its reports and policy-making: “As an intergovernmental organisation, we primarily offer services to our member countries” primarily in the form of our statistics and its analysis of the cocoa market.

The record level crop is due to favourable weather conditions for the top two producing countries, Côte d’Ivoire and Ghana, including higher production data for Ecuador.

And according to the ICCO latest annual report in 2017/18 which is still in draft form, production saw a year-on-year “modest surplus, estimated at 22,000 tonnes the 2017/18 cocoa year after witnessing a record surplus (the biggest in the past seven cocoa years) during the previous season”. 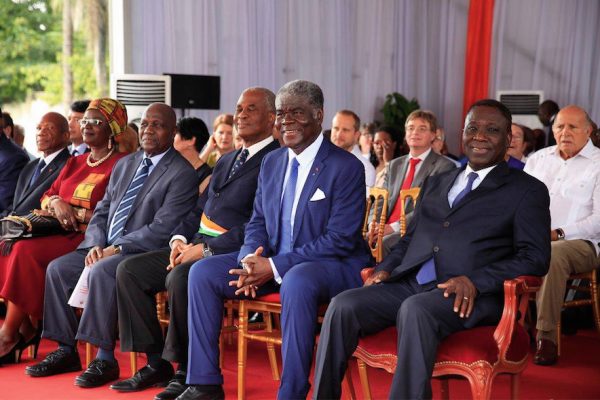 So, the ICCO called it “a more balanced crop year due to lower mid crops in Ivory Coast and Ghana” as the organisation estimated the global cocoa beans production to have decreased by 2.2% to 4.638 million tonnes in the 2017/18 cocoa season, compared to the previous season.

In contrast, production in the Americas is estimated to have grown by almost 8%, to 891,000 tonnes, with Brazil and Peru accounting for most of the increase.

Such data matters to the global confectionery market: In 2017/18, market conditions further improved and volumes in the global chocolate confectionery witnessed an increase of 1.8% compared to the previous season, the annual report said adding: “Low cocoa prices continued to support consumer demand.”

Such analysis is of value to the confectionery and sweet bakery sector, but the user industry is also keen to influence how the ICCO works, given that, at the last resort, Brussels-based European industry association Caobisco secretary general Marina Valverde noted to Confectionery Production that “the ICCO is an international organisation, so it is for its members, governments from cocoa exporting and importing countries, to decide about its work.”

Therefore, the fact Caobisco, and some of its members, including some its national associations, contribute to the work of ICCO through the Consultative Board (CB) of the World Cocoa Economy.

Valverde stressed that Caobisco supports the CBs proposal that its members could attend the ICCO council meetings. The association has also welcomed the appointment of Michel Arrion as ICCO’s new executive director, as announced last October (2018).

Belgian national Arrion, a past ambassador of the European Union in countries such as Nigeria, Rwanda and Côte d’Ivoire, is, said Valverde, “a representative from cocoa consuming countries with a lot of experience in West Africa and international organisations.” As such, she believes he will help ICCO policy find “a good balance between the cocoa producers and the consumers”.

He told Confectionery Production that “the relocation of ICCO headquarters to Cote d’Ivoire is not a problem, as long as the organisation follows a clearly defined strategic plan and continues to engage with different stakeholders in the cocoa value chain.”

Clearly, “the ICCO has an important role to convene government representatives from cocoa producing and consuming countries,” Mr Guyton said – although the USA is not yet a member.

He added that the FCIA is pleased that Arrion was to be attending its upcoming conference ‘Elevate Chocolate Summer Event’ held on June 22, in New York. And “this is part of ICCO’s ongoing outreach to chocolate companies of all sizes and segments in the industry,” he said. “There are opportunities for ICCO to work more closely with trade associations, such as FCIA, on topics related to cocoa quality, supply chain improvements, and farmer livelihoods,” Mr Guyton said.

He stressed how ICCO participants include cocoa producers, governments from cocoa-exporting and cocoa-importing countries, companies in the cocoa and chocolate industry, donors, international development agencies and civil society groups.

Dr Anga called 2017-18 year a “momentous” one for the organisation having organised the first edition of the International Symposium on Cocoa Research (ISCR 2017) in Lima, Peru, in November 2017, as recommended by the International Cocoa Council at its ninety-fourth regular meeting in London in September 2016, which includes representatives from member countries.

Last April (2018), the fourth edition of the World Cocoa Conference (WCC4) was held in Berlin, Germany – a bi-annual event that the ICCO has been organising since 2012, fulfilling the organisation’s mandate to act as a forum for all strategic cocoa matters.

Ivory Coast Cocoa Season Grindings up 8%, According to Exporters

May 31, 2022
Prev Next 1 of 179
Newsletter
Featured Jobs
You cannot print contents of this website.