19,000 hectares destroyed in one year 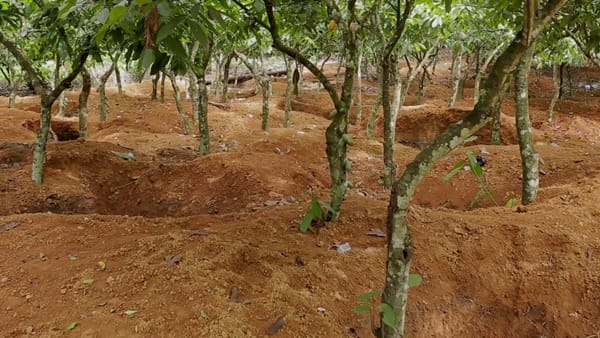 According to the sector regulator, Ghana Cocoa Board, between 2019 and 2020 more than 19,000 hectares of productive cocoa farms in two regions were ravaged by illegal gold miners.

Myriad factors have been identified to contribute to the disturbing phenomenon, including farmer poverty, youth unemployment and sheer impunity by the illegal gold miners.

The uncontrolled activity of galamsey operators, without a doubt, is destroying livelihoods. It is also leaving in its wake massive destruction of forests, water bodies and farmlands, as well as health and economic implications.

Investigations have revealed how some illegal miners adopt brute strategies, including the use of force to exploit cocoa farmlands for gold.

In a recent news reportage by Accra-based media house, TV3, a miner in the Ashanti region denied the use of force.

“Every cocoa farmland we are exploiting was sold to us by the farmer. We don’t use force to get the land,” claimed Eric Addai-Kusi, a galamsey operator.

Addai-Kusi, however, conceded to adopting unconventional means of persuasion “such as diverting water courses away from farms leading to the destruction of the cocoa farm. That way the farmer is left with no option but to surrender the cocoa farm for compensation.”

The miner, whose galamsey operation is based in the Kunsu traditional area of the Ashanti Region, shared insights into how they are able to acquire cocoa farms for galamsey through irresistible cash inducement.

“Where some miners may be paying GHS10,000 per acre of cocoa farmland, I could offer up to GHS50,000 per acre such that if you (a farmer) consider your sorry financial situation you can’t refuse it,” Addai-Kusi stressed.

Most cocoa farmers in Ghana live below the poverty line earning incomes of less than $1 a day for their toil.

Prices of cocoa on the international market have been dropping consistently necessitating calls by producers and civil society for sustainable prices that factor in the cost of production.

But while cocoa buyers and chocolate manufacturers are yet to respond positively, some disillusioned cocoa farmers are already resorting to really desperate measures.

“You see this piece of land, I took about Ghc30,000 for it. In just about two months I have built my own 2-bed room house from the proceeds,” disclosed Akwasi Fordjour, a cocoa farmer at Kunsu.

Fordjour regretted, “I have worked for 20 years on this cocoa farm and I couldn’t even buy a plot of land,” emphasising “Now I have plenty money in my pocket.”

The 62-year-old father of six says he has tasted real poverty producing cocoa and thus doesn’t mind at this point cutting down “my own bona fide property” for galamsey money.

Farmers and stakeholders have warned that unless very drastic measures are taken immediately cocoa could lose out to illegal gold mining.

“When you look at the issue of galamsey and its level of devastation, you’ll realise that if you don’t do something at this time to give some level of assurance and some kind of motivation to farmers, in terms of the pricing, then farmers will be more likely to sell their farmlands to these illegal miners,” advised Ismail Pomasi, a cocoa farmer.

He suggested that while addressing the price factor, the government must commit to a comprehensive clampdown on illegal mining.

Another cocoa farmer, Nana Kwasi Opoku, 67, foresees a drastic drop in cocoa production by the next decade if nothing is done to prevent farmers from turning over their farms to illegal gold miners.

“I have been producing cocoa for about 40 years now. And to think that I cannot boast savings of up to GHS4,000 is such a pity. So if someone offers me GHS50,000 to take over the farm why should I turn it down?” he quizzed.

But forecasts by the International Cocoa Organisation (ICCO) point to a significant drop in global production.

Cocobod says by the first six months of the season it had recorded a 34 percent slump in output  compared to same period the previous year.

Its Public Affairs Manager, Fiifi Boafo, says the Board is forced to revise downward its 850,000MT production target for the year to 650,000MT, estimated to cause a $350 million hole in revenue projections.

The Cocobod spokesperson is hoping that the country’s Minerals Commission and the security agencies will exercise their mandate and intervene to stem the onslaught by illegal miners in cocoa farms.

Boafo disclosed, “one of the things we are doing is to present law that makes it more difficult for one to take over a cocoa farm.”

“As it stands now if somebody decides to take down a cocoa tree for the purposes of mining the person is expected to only pay GHS20 as loss of use right,” he stated.

“We believe that this is not good enough. Because if you look at the number of years this cocoa tree will stand and the pods that it will develop over the years, certainly paying the person GHS20 should not suffice,” said Boafo.

There have been instances where some bold cocoa farmers have fiercely resisted overtures by illegal miners, but eventually gave up the fight for a lack of capacity and resources.

In such cases, Mr Boafo assured that Cocobod has opened its doors to offer legal assistance by its lawyers to cocoa farmers who lack the capacity to contest in court attempts by illegal miners to forcibly take over their farms.

Beyond that, the public affairs manager also indicated, the cocoa regulatory authority is exploring “means of improving the productivity and the remuneration of the cocoa farmer so that they will be able to withstand any advances made to them.”

Ghana, the world’s second-largest producer of cocoa beans, faces a total ban on its cocoa by the European Union (EU) for alleged unsustainable production practices, namely deforestation and child labour.

The EU market accounts for 80 per cent of Ghana’s cocoa exports. The Deputy Chief Executive in charge of Agronomy and Quality Control at COCOBOD, Dr Emmanuel Agyemang Dwomoh, said “if the EU carries out its threat Ghana’s cocoa sector will suffer,” BusinessInder reported.

He denies that cocoa is responsible for environmental degradation, instead pointing to illegal gold mining activities.

Dr Dwomoh recounted the effects of illegal gold mining activities on cocoa production and its exportation is telling, joining the chorus of “drastic measures to stop the illegal act.”

“There is crop loss, reduction of crop yield and income, loss of vegetation, the fertility of the crop soil is destroyed and [there’s also] an early dropping of immature pods as a result of the chemicals that they use.”

Uncertain future for the backbone of Ghana’s economy?

Ghana’s cocoa sector goes far beyond bean production. Other important parts of the multi-billion-dollar value chain include agro-input, insurance and finance, internal marketing, haulage and logistics, processing and value addition, among others.

Aside from churning out millions of jobs and livelihood opportunities for Ghanaians, the cocoa sector is so christened “the backbone of Ghana’s economy” due to an average $3 billion dollars it rakes in annually to provide stability support to the local currency – the Ghana Cedi.

The sector is projected to remain an integral pillar of the Ghanaian economy underscoring the $600 million AfDB credit facility procured by the government two years ago to revitalise production.

For many industry watchers, the present state of affairs begs the question can Ghana’s cocoa sector survive the unbridled invasion of illegal gold mining activities?

This question may remain relevant for years to come as long as the State with all its sovereign authority, laws, institutions and agencies stands seemingly powerless and looks on as illegal gold miners rape the environment, obliterate agricultural activies and devour our very existence.