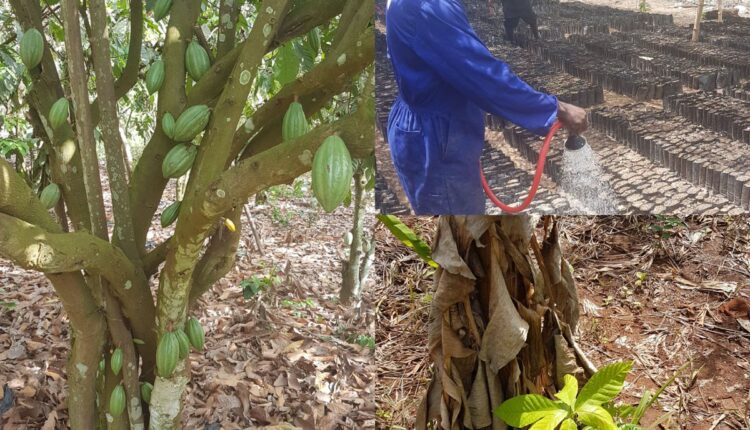 Ghana Cocoa Board has reviewed upwards, the initial treatment grant which is part of the compensation package for landowners and cocoa farmers who agree to cut and replant farms affected by Cocoa Swollen Shoot Virus (CSSVD) under the ongoing National Cocoa Rehabilitation Programme.

The initial cocoa farm rehab treatment grant which was pegged at GHC552.96 has now been increased to GHC1000.00 per hectare.

The Chief Executive of Ghana Cocoa Board (COCOBOD), Mr Joseph Boahen Aidoo, announced this at Sefwi Wiawso in the Western North Region at a durbar of chiefs and people of Sefwi Wiawso Traditional Area in honour of the President of the Republic of Ghana, Nana Akufo-Addo, who is on a 3-day working visit to the Region.

Mr Aidoo said that out of a total of 1.9 million hectares of cocoa farms surveyed, 315,800 hectares had been affected by the swollen shoot viral disease.

Out of this, the Western North Region alone had 214,500 hectares of affected farms. He, therefore, advised landowners and cocoa farmers to allow their infected trees to be cut and replanted with high yielding, early bearing and disease tolerant seedlings for increased and sustainable yield.

According to the Chief Executive, the cost of cutting the infected cocoa trees and replanting will be borne by government and COCOBOD.

In addition, plantain suckers and economic trees seedlings will be supplied at no cost to the affected farmers.

The COCOBOD boss stressed that no chemical can treat an infected cocoa tree unless it is cut and replanted.
“Out of every five hectares of cocoa farm, two hectares are infected”, he lamented.

He, therefore, urged the farmers to embrace the National Cocoa Rehabilitation Programme to forestall any decline in production output.

He said the youth in the farming communities have been engaged in the replanting exercise to create employment for them under the Cocoa farm rehab program.

The Chief Executive had earlier led the President and his entourage to tour a CSSV treated farm at Ntrentreso, a farming community near Sefwi Wiawso.