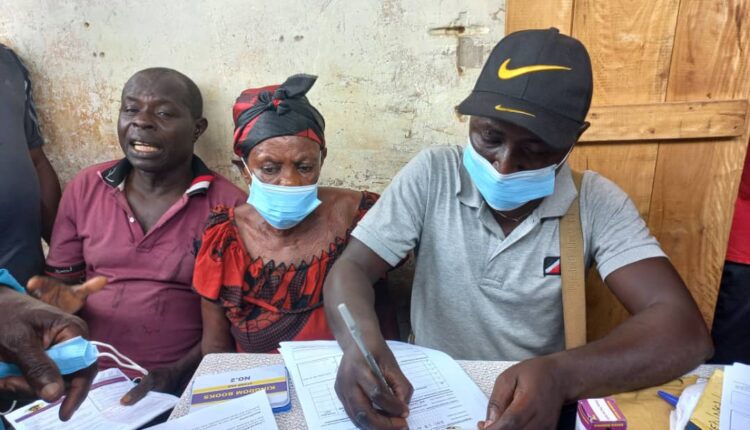 Pilot registration under the Cocoa Farmers Pension Scheme for a cross-section of Ghanaian cocoa growers has taken off in the Ashanti Region.

Some 2,800 volunteer farmers from the New Edubiase District are expected to be captured within the course of the mock exercise.

The process involved the capturing of the personal details of the farmer onto the pensions enrolment form and then proceeded with the weighing of the farmer’s bagged cocoa beans at the point of sale to establish its value.

Chairman of the Cocoa Farmers Pension Scheme Implementation Committee, Mr Charles Osei Akoto, explained that 5% of the value of the cocoa is deducted as the farmer’s contribution using a mobile application.

The farmer upon the completion of the transaction receives an instant SMS alert on their phone to confirm success or otherwise.

The pilot registration exercise of the Cocoa Farmers Pension Scheme in the New Edubiase District of the Ashanti Region is said to continue until all 2,800 volunteer farmers in cocoa-producing communities in the district have been duly registered.

The full-scale onboarding of the country’s cocoa farmers onto the scheme is planned to begin with the 2021/22 cocoa crop season in October.

An estimated 1.5 million cocoa farmers are targeted to be registered for the scheme, which has been on the books for 37 years.

Public Affairs Manager for Ghana Cocoa Board, Fiifi Boafo, last week hinted, “this is in preparation for the roll out ahead of the 2021/22 cocoa season,” Boafo explained.

About a fortnight ago, the Ghana National Cocoa Farmers Association (GNACOFA) threatened to have their members demonstrate over delayed operationalization of the scheme launched in December 2020.

The pilot registration exercise earlier reports noted is organised jointly by COCOBOD, the National Pensions Regulatory Authority (NPRA) and the Trustees for the Pension Scheme.

In June this year, the National Pensions Regulatory Authority (NPRA) said it has been working at the modalities for operationalising the scheme with Ghana Cocoa Board and other stakeholders.

But eight months on the programme is yet to be operational as cocoa farmers remain highly expectant.

The collection of contributions he explained will be taken at the point of sale where farmers sell their cocoa beans to the Licensed Buying Companies (LBCs).