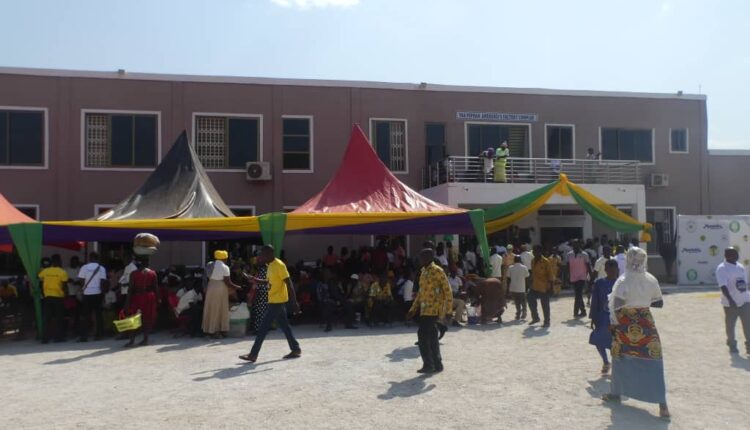 About 9,000 members of the Bia West Cocoa Farmers Union, with the assistance of Mondelez International, have pooled resources from their cocoa trade over the past 5 years to construct a soap processing factory valued at $1.5 million.

The facility, which is situated at Essam will provide an alternative source of income for members of the association in the Bia West District of the Western North Region.

The first phase of the factory is expected to produce about 5 tons of solid and liquid soaps from cocoa husks while the second phase will process potassium carbonate, a substance considered critical for the pharmaceutical industry. Some 350 direct and indirect jobs are expected to be created from the operations of the company.

Addressing a durbar of farmers at a ceremony to commission the project, the Head of the Cocoa Health & Extension Division, Rev Edwin Afari who spoke on behalf of the Chief Executive of Ghana Cocoa Board, said the initiative is worth emulating by other farmer cooperatives and praised the leadership and members of the Bia West Cooperative for the decision to consider a sustainable source of income for the association.

He said the Board was ready through the Cocoa Research Institute of Ghana (CRIG), to provide technical and scientific backstopping to enhance the operations of the factory.

According to Rev. Afari, proceeds from the sale of cocoa alone are not adequate to assist farmers to invest in their farming operations to boost yield and added that the soap processing factory will provide a reliable extra income to support the cooperative’s collective efforts.

He indicated that the Board would enhance all the productivity enhancement programmes and implored the farmers to give their maximum support by sharing their experiences from adopting the programmes to encourage other farmers to do the same.

“The Chief Executive says I should assure you that policies and programmes such as the mass pruning, subsidized fertiliser, irrigation, spraying, rehabilitation and other price-guard initiatives would be pursued and enhanced vigorously to secure the incomes of our farmers,” he indicated.

Rev. Afari further said he had been impressed with the initiative and indicated that the Board would plan a facility tour next year for a better understanding of the production cycle to enable them to provide the required support the soap processing factory would need to meet quality and safety criteria.

According to him, the rehabilitation of dead and diseased cocoa farms currently ongoing in the Region would be scaled up to cover more hectares and praised the Essam Chiefs for the land; Mondelez for the support and the farmers for their enthusiasm and foresight.

He warned persons involved in smuggling cocoa beans to neighbouring Cote D’Ivoire to desist from the act or face the consequences of their action.

The Chairman of the Bia West Cocoa Farmers Cooperative Alhaji Adama Issah said the cooperative started with just 250 members but has expanded its membership to 9,908.

Alhaji Issah extolled Mondelez International for supporting the vision of the group towards the construction of the facility and other assistance the cooperative had received over the years.

“This project is indeed a solid source of additional income for our members and we are proud of the commitment of members and the efforts of the contractors,” he said.

In a brief statement, the Country Director of Mondelez International, Yaa Peprah Amekudzi lauded the zeal, sacrifice, passion and enthusiasm shown by the cooperative members towards the project and urged other Cocoa Life Cooperatives across the country to initiate more robust income-driven self-help projects using their premium.

Mrs Amekudzi assured of her outfit’s continued support for additional livelihoods and yield-enhancing projects to better the lot of cocoa producers.

The Chairman of the occasion, Nana Ofori Ahenkan 11, Krontihene of Sefwi Wiawso in his closing remarks advised the management of the factory to ensure that it remains a useful business entity for years.

“Our major challenge as a people is the lack of a culture of maintenance. This syndrome has caused the collapse of several factories in this country which were once vibrant. Perish the thought that we should fail to maintain this factory for prosperity,” he advised.

The first carton of the farmer-produced cocoa extracts soap was sold for GHC20,000.