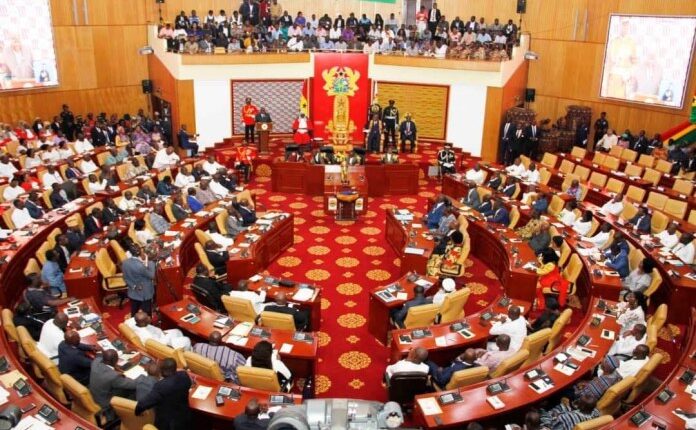 Parliament has approved US$1.3 billion loan facility from a consortium of banks and financial institutions to finance the purchase of cocoa for the 2020/21 crop season by the Ghana Cocoa Board (Cocobod).

The loan would be used to purchase an estimated 900,000 metric tonnes of cocoa beans from farmers through the Licensed Buying Companies (LBCs) and to also finance other operations of the Board for the cocoa season.

Part of it will also be used in certain operational areas including fertilizer distribution and application, cocoa diseases and pests’ control, cocoa roads, among others.

The House also approved a waiver of Stamp Duty amounting to US$6.5 million on the receivables-backed trade facility with the government as guarantor.

Presenting the Finance Committee’s report to the house prior to the approval, the Chairman of the Committee, Dr Mark Assibey-Yeboah highlighted the need for substantial financial resources to enable COCOBOD purchase cocoa beans, which will consequently increase levels of production.

He said the Committee noted the cocoa industry, which employs an estimated two million people along the supply chain, plays a crucial role in the economic development of the country and remains a major source of the country’s foreign exchange earnings and contributes significantly to the Gross Domestic Product (GDP), hence, the need for such support to the sector.

Repayment of the principal is to be effected by seven equal instalments beginning February 2021 and ending August 2021, Dr Assibey-Yeboah noted.

In an interview with the media following the approval, MP for Ho Central, Benjamin Komla Kpodo, expressed worry at the rate of borrowing to facilitate cocoa buying every year, saying, it is about time managers of COCOBOD devised innovative ways to generate funds internationally for the purchase to reduce borrowing and financing cost.

“Over the years we are borrowing. If we are more prudent in the management of the cocoa sector, we should be saving money gradually towards relying on ourselves to purchase cocoa. So I feel that this US$1.3 billion is too high as an expenditure, from the revenue that we obtain from cocoa.

Meanwhile, last year, the deficit incurred by COCOBOD was GH¢1.9 billion and this year, they are estimating that they will have a deficit of roughly GH¢260 million.

These are the areas that we can manage and reduce the expenditure so that progressively, we can save money and in future, we wouldn’t have to go and borrow at such high-interest cost before we can buy cocoa,” Mr Kpodo said.

Earlier in June, the Chief Executive of COCOBOD Joseph Boahen Aidoo, disclosed that the Board in spite of the impact of the COVID-19 pandemic has cleared up its 2019/2020 syndicated loan facility this month, 3 months ahead of schedule.

Ghana Cocoa Board (COCOBOD) has this month, June 2020, completely paid up the contracted for the 2019/2020 cocoa crop purchases.

The September 2019 $1.3-billion syndicated loan facility signed in Paris, was put together by some 20 banks including Societe General, Nedbank, MUFG, and NET-IXIS.

Meanwhile, the 2020/21 crop season is set to open from October 1 this year, which will see the announcement of the producer price or farmgate price for a 64kg bag of cocoa.

Quantity Or Quality of Production – Does Any Of These Improve Cocoa Farmers’ Income?