...As It Trains Members On Organic Farming At 2-Day Workshop 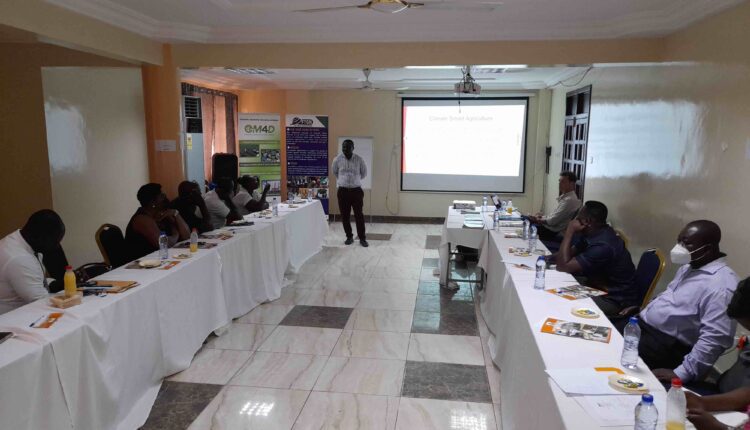 According to the Food and Agriculture Organisation (FAO), eighty percent of the farmland in sub-Saharan Africa and Asia is managed by smallholder farmers, who are estimated to produce a third of the world’s food supply.

Research also shows that smallholder farmers are the most at risk and heavily impacted by climate change.

Experts have attributed their vulnerability to climate change as stemming both from being predominantly located in the tropics, and also from various socio-economic, demographic, and policy trends limiting their capacity to adapt to change.

With the impact of the extremities of climatic patterns already upon food growers, comes the need to empower communities to build capacity to adapt to climate change.

Fair Trade Ghana Network, a group championing sustainable agriculture, has in response held a 2-day sensitisation programme on climate change and organic practices for its network of cocoa and fruit farmers across Ghana. Participants were mainly pineapple, citrus and cocoa farmers.

Kwame Asa-Ofori, a cocoa farmer of over three decades, and an executive of the Network has been producing organic cocoa for some years now.

He said the Fairtrade premium for organic cocoa of about $630-per-tonne is a good incentive.

He also takes pride in the knowledge that his 15-acre organic cocoa farm positively impacts the planet with his zero chemical use farming practices.

Cocoa production in Ghana has in the last couple of years suffered the harsh effects of drought, seriously impacting the country’s annual crop output.

Asa-Ofori said that run of extremely low rainfall affected his farm and admits the period was particularly trying for him, especially with his little to no knowledge on organic farm management in a period of such extreme events.

Dennis Oppong, a Senior Advisor on Sustainable Agriculture at the Agro Eco Louis Bolk Institute and a resource person at the Fair Trade Ghana Network training workshop, was emphatic smallholder farmers like Asa-Ofori may never be prepared enough for the effects of climate change.

“To continue to grow cocoa there’s a need for farmers to work to mitigate the adverse effects of climate change. So the idea is to support farmers to implement Climate Smart Agriculture” he said.

He explained Climate Smart Agriculture aims is to make cocoa production resilient to the negative impact of climate change while supporting farmers to adopt best practices that ensure they can continue with their business. But he insisted there is no one-fits-all approach.

“Already you tell the cocoa farmer to plant shade trees on their farms and there are some numbers that are given, for example up to 20 trees per hectare is prescribed in a blanket approach. But with Climate Smart Agriculture, cocoa-producing areas may fall within either of three climatic zones – coping and opportunity zone, adjustment zone and the transformation zone – thus a recommendation is determined by prevailing climatic conditions,” said Oppong.

He observed that Climate Smart Agriculture works best when adopted and practised at the community or landscape level, rather than at individual smallholder farmer’s level.

He advocated a shift to organic agriculture especially in the cocoa sector, listing such benefits as improvement in crop productivity, livelihood improvement, market premiums, healthy produce as well as enhancement of soil health.

Toose advised the organic farmers to repurpose farms waste for compost and biochar production to enrich the soil while making savings on organic fertilizer purchases.

Other speakers included Nana Aduna II, a cocoa farmer and cocoa value addition practitioner, and Prof. Godfred Kwabena Ofosu-Badu of the Crop Science Department of the University of Ghana.