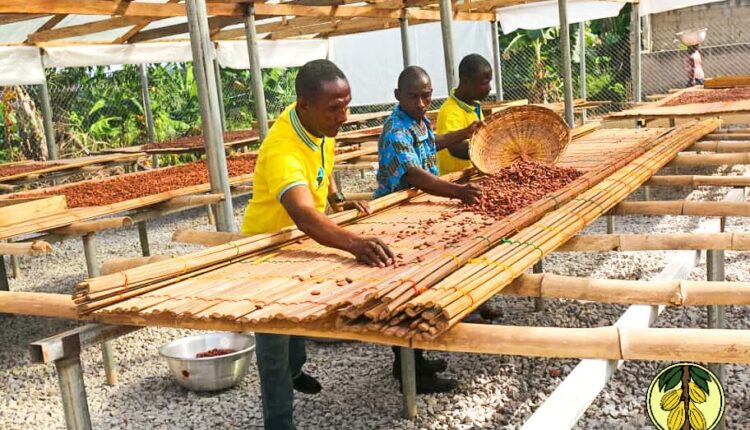 Transroyal Ghana Limited, Tachibana and Guittard with technical support from the Cocoa Research Institute of Ghana (CRIG) have funded the construction of Ghana’s first cocoa fermentation centre and handed over to the Offinso Fine Flavour Cocoa Farmers’ Cooperative.

The facility, which is owned by the cooperative provides a modern structure to support the farmers to ferment their cocoa beans, dry them under acceptable conditions, bag and weigh with electronic scales.

Speaking at the ceremony to hand over the facility, Mr Stephen Opoku, Head of the Fine Flavour Laboratory at CRIG said, Ghana’s niche as the producer of best premium cocoa is as a result of the painstaking steps adopted by farmers to ferment and dry their cocoa using natural means and called on cocoa farmers in the country to ensure strict adherence to the use of the right materials and processes to ferment cocoa. 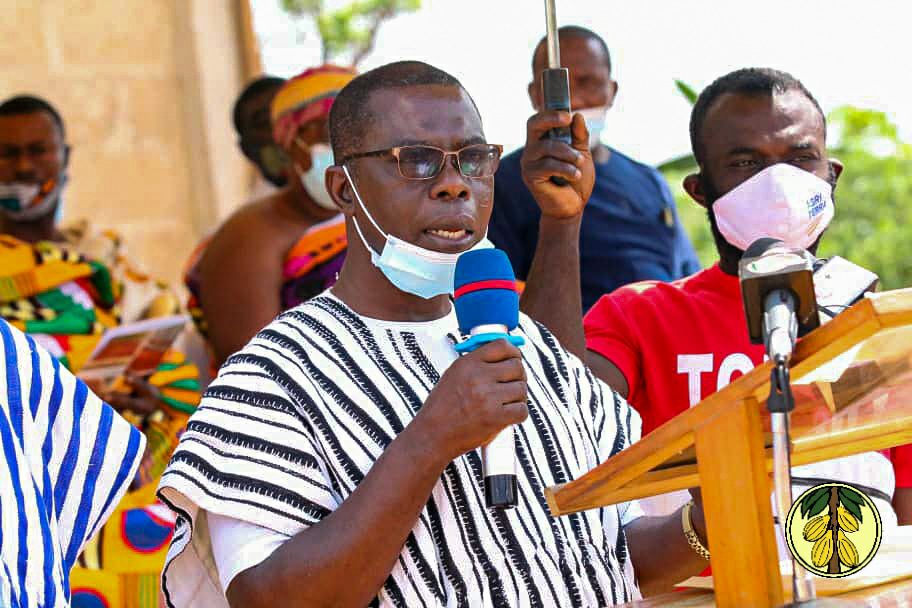 Delivering the keynote address to officially hand-over the facility to the Fine Flavour Cocoa Farmers’ Cooperative, the Executive Director of CRIG, Dr. Isaac Yaw Opoku said the opening of the fermentation centre ties into efforts by Ghana to ensure the production of fine flavour cocoa to feed the world’s confectionery market.

He said the fermentation centre was built to ensure that the quality of cocoa produced at Offinso and its environs meets international benchmarks for measuring good quality and fine flavour cocoa.

He further disclosed that the Ghana currently produces a substantial amount of fine flavour cocoa and projected a rise in production with the identification of more conducive areas for its production.

“Our initial soil tests showed that soil in Offinso supports the fine flavour cocoa production. He added that recent studies had shown that soils at some cocoa areas around Akim Oda are perfect for the promotion of fine flavour cocoa and implored Ghana Cocoa Board to assist to set up a similar fermentation centre at that area.

Dr Opoku further disclosed that fine flavour cocoa is highly priced on the world market, selling between US$5000 to US$10,000 per tonne and urged farmers to value the facility and its core functions.

According to him, Ghana’s attempt to penetrate the niche cocoa market began with a pilot project in the Offinso District in 2008 and lauded the steady growth in membership of the Offinso Fine Flavour Farmers’ Cooperative from 15 to 515 within that shortest period. He expressed optimism that the numbers would go up as more and more farmers sign on to the project.

The Chairman of the Offinso Fine/Flavour Farmers’ Cooperative, Mr. Alex Opoku Mensah said the fermentation centre had come as a great relief to farmers and would eliminate theft associated with fermenting cocoa in the farms.

He also said exposure of cocoa beans to bad weather conditions during the post-harvest processes will reduced drastically and expressed appreciation to the COCOBOD and the project’s partner for their continued support towards the production of Fine/Flavour cocoa.

Mr Opoku appealed to the funding partners to support the cooperative with three tricycles to aid the carting of cocoa pods to the centre for fermentation and also appealed to License Buying Companies to ensure prompt payment for cocoa purchased from farmers to enable them meet their financial obligations.

Speaking on behalf of the partner organizations of the project, the Managing Director of Transroyal Ghana, Mr Amadu Mohammed pledged to provide the farmers with three tricycles as requested to help them transport their cocoa beans to the fermentation centre and also urged them to adhere to practices that guarantee premium quality cocoa.

The Chief of Kokote, Nana Opoku Asiedu II who represented the Chief of Offinso expressed appreciation to COCOBOD and the partner organizations for establishing the fermentation centre in Offinso and advised the farmers to manage the centre well to encourage the establishment of similar centres at various farming communities in the area and beyond. 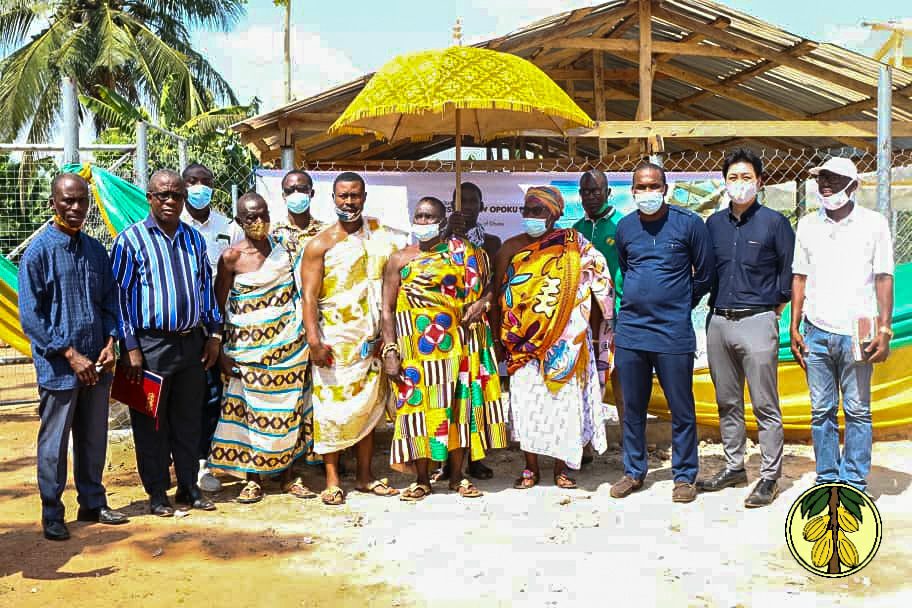 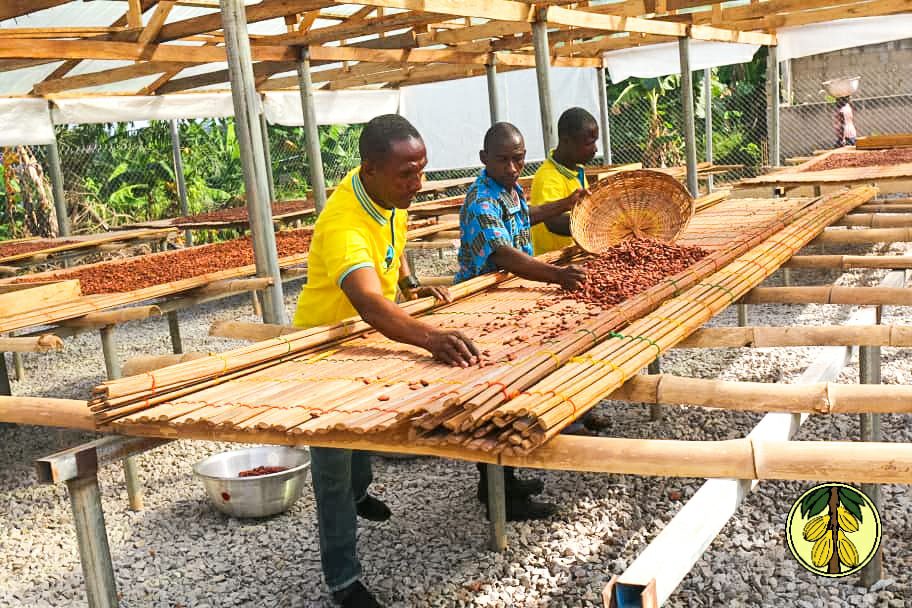 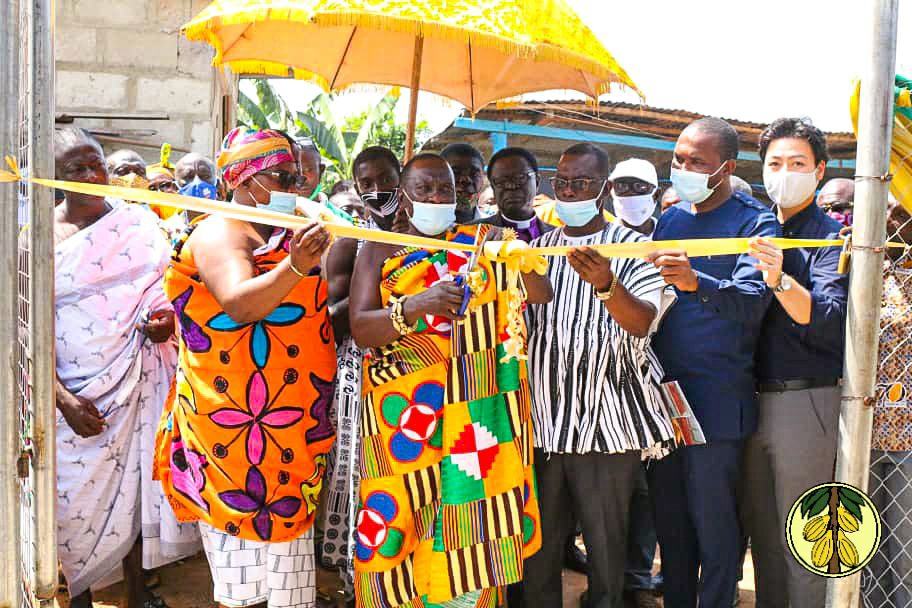 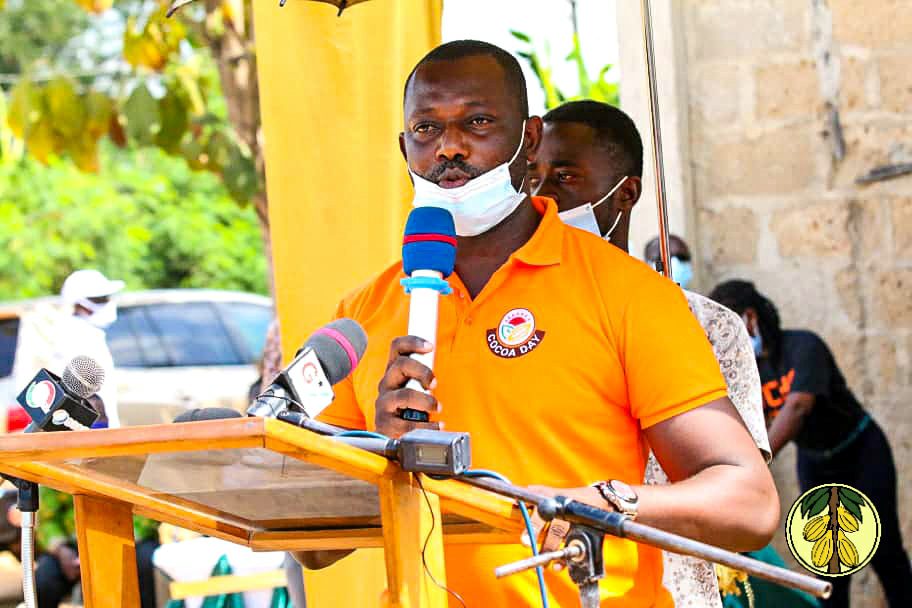 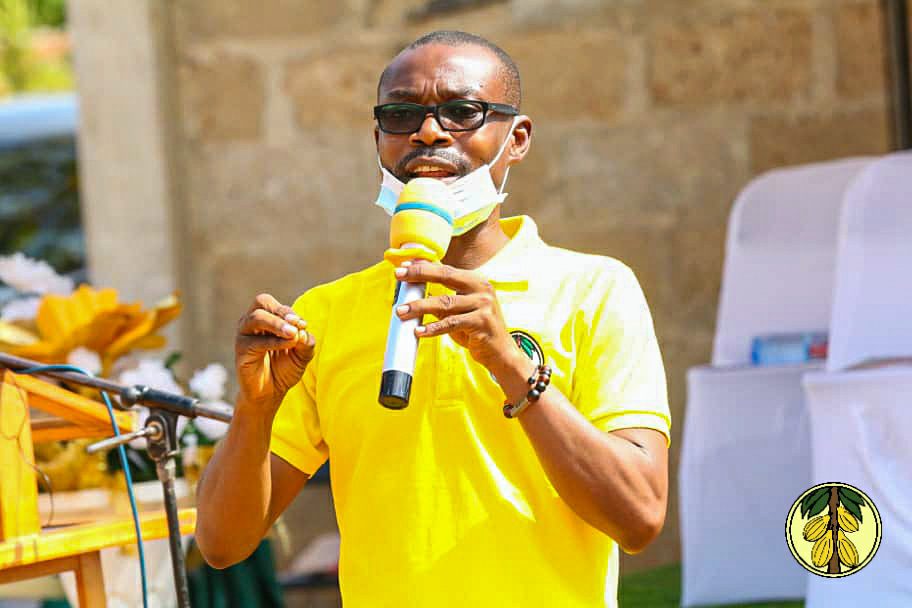 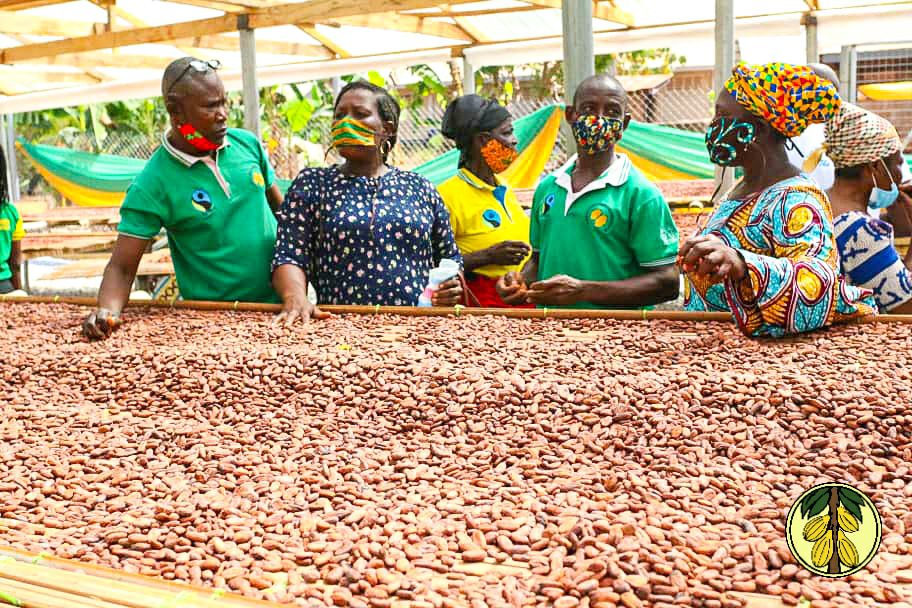 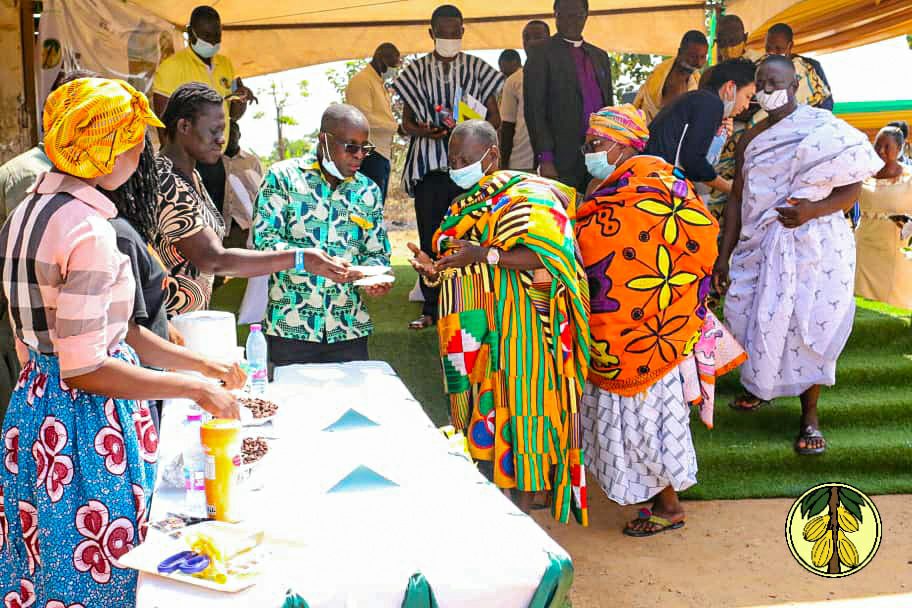 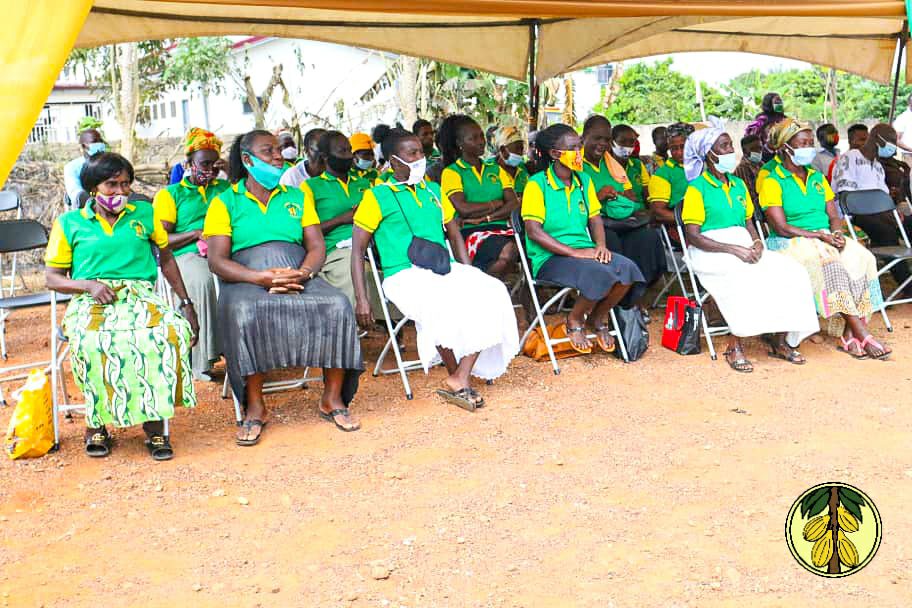 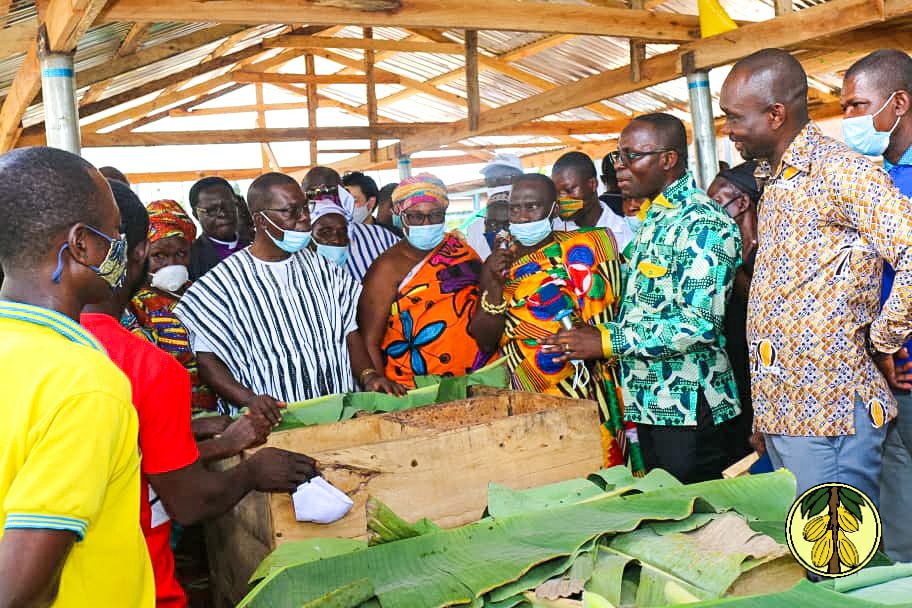