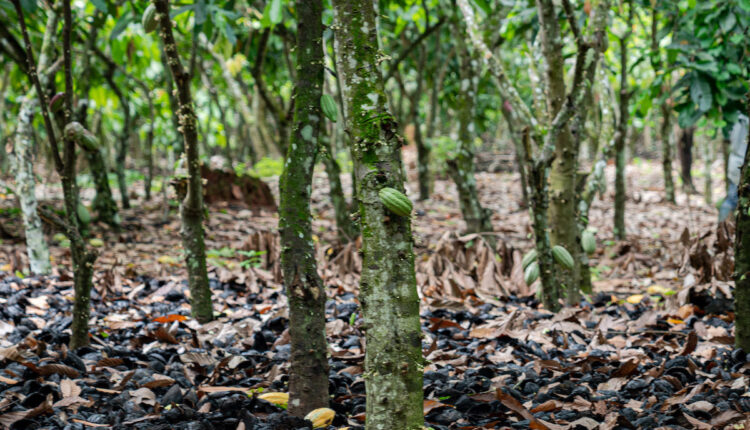 Cocoa farmers in Ghana have warned that the country could lose more productive cocoa farms to illegal mining if cocoa prices remain unchanged.

This alarm by cocoa farmers comes ahead of this year’s Cocoa Day (October 1), which marks the beginning of the cocoa year.

In Ghana, the day is very significant as it coincides with the government’s annual announcement of the cocoa producer or farmgate price for the ensuing cocoa season.

A bad signal to cocoa farming

Although the government is yet to make any public statement on the matter, unofficial sources have cited Cocobod’s indebtedness as a reason an increment in the cocoa producer price cannot be expected.

Ismail Pomasi, a cocoa farmer in the Ahafo Ano South District of the Ashanti Region told Cocoa Post “it will be a bad signal to cocoa farming,” adding that “already the industry is under serious threat.”

Cocoa production in the world’s second-largest exporter nation is under the siege of a four-prong challenge of drought, disease, illegal mining and poor commodity prices, which seriously threaten sustainability.

The government and Ghana Cocoa Board (Cocobod), the sector regulator, are implementing the National Cocoa Rehabilitation Programme with support from the Africa Development Bank (AfDB) in response to the Cocoa Swollen Shoot Virus Disease (CSSVD).

A Cocobod audit in 2017 revealed that more than three hundred thousand hectares (300,000ha) of cocoa farms had been infected by the disease which renders cocoa trees unproductive.

For the issue of climate change-induced drought, which is also adversely impacting productivity, studies by Cocobod and other stakeholders have established that an irrigation intervention could improve the situation.

The other two challenges confronting the cocoa sector – illegal mining and poor prices – continue to remain daunting puzzles yet to be tackled.

“When you look at the issue of galamsey and its level of devastation, you’ll realise that if you don’t do something at this time to give some level of assurance and some kind of motivation to farmers, in terms of the pricing, then farmers will be more likely to sell their farmlands to these illegal miners,” Ismail Pomasi opined.

According to him, Cocobod and the government have a golden opportunity to increase the producer price to demonstrate their commitment to preserving the cocoa sector as a major contributor to the national economy.

The call for an increment in the cocoa producer price for the 2022/23 season, he explained is not based on capricious expectations.

He told Cocoa Post editor, Kojo Hayford, that his group of farmers are expecting nothing “less than a 30%” raise in the farmgate price, citing a number of reasons.

His colleague based in the Ashanti Region also identified the rapidly increasing cost of input, mainly fertiliser and pesticides, as another reason the government must as a matter of necessity adjust the cocoa price upward.

He said, “we are aware that at the international level the price has not gone up; we agree with the government, but we are concerned about the dollar and then the effect of the depreciation of the Cedi on the overall economy.”

“So please we are pleading with the government that since the cost of production has gone high over 100%, we know that the government cannot increase the cocoa price by 100% but at least a 30% increment will be ok…so that we all share the losses,” Issaka appealed.

Isamil Pomasi contended that the government has since the last increment, two years ago, made significant exchange rate gains worth sharing with its hard-pressed cocoa farmers.

“The last time the price was increased, the [US] Dollar was around GHS5 plus, but as I speak now the Dollar has hit GHS10 and beyond and what happens to these gains?” he asked.

With unsustainable cocoa prices on the world market coupled with the prevailing harsh economic situation, many cocoa farmers, they say, have become disillusioned.

It doesn’t get any better with the increasing threat of illegal mining, where many farmers face the dilemma of choosing between their cocoa farms or selling out to illegal galamsey miners.

“So, if the government tells us that this year it is not going to increase the price, then the question is are we ready to help farmers sustain the industry? Or we ourselves have also admitted that the cocoa industry has no future, so farmers should start thinking about engaging themselves in other things,” the Ahafo Ano South farmer quizzed.

Already reports are rife about many cocoa farmers, especially in the Western, Eastern and Western North Regions, giving in to enticing offers from illegal miners in the face of extreme financial hardships.

Fears are that this challenge which stares Cocobod and the government in the face could get out of hand if farmers are not encouraged to hang on.

“If the government decides not to increase the price, I am telling you we will see so many farmers selling off their farmlands to the illegal miners,” Ismail Pomasi warned.

The cocoa farmers shared stories of hardship and suffering being endured in cocoa communities by cocoa farmers and their families, including children.

They noted that every economic situation that affects all citizens in the country, the cocoa farmer is also part of it, and insisted it will be quite unfortunate for Civil Servants to receive COLA (cost of living allowance) whereas cocoa farmers are ignored.

For Ismail Pomasi, cocoa farmers are not oblivious to the inflows their daily toil brings into the national kitty for the benefit of all Ghanaians.

He mentioned the USD1.3 billion cocoa syndicated loan expected to come in for the purchase of the 2022/23 crop and to help stabilise the local currency.

“We know that the industry is under threat and we are not coming out with measures to provide some kind of assurance to farmers that you can better your lives with cocoa farming, then I am sorry we will begin to look at other alternatives that could have the potential of not sustaining the industry,” he said.

He reiterated on behalf of all cocoa farmers the appeal for the government to consider the increasing input and labour cost and the Cedi depreciation and “increase the cocoa price by a margin of 30%.”

Oct 3, 2022
Prev Next 1 of 191
Newsletter
Featured Jobs
You cannot print contents of this website.