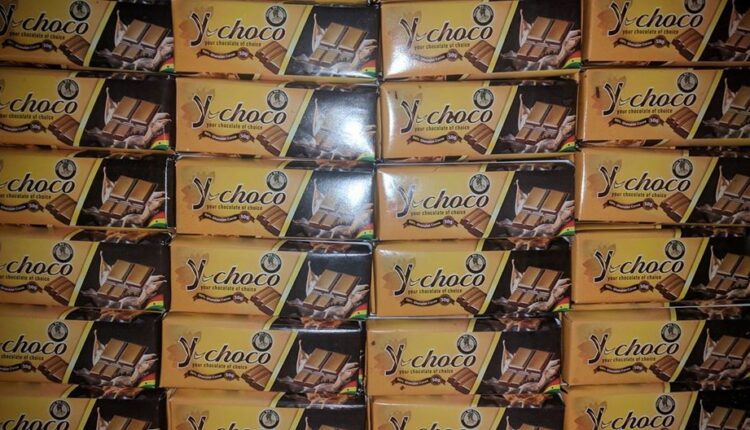 Two young graduates of the University of Ghana have set up a cocoa processing factory in Anyinam in the Atiwa West District of the Eastern Region.

The two young men, Kwabena Opoku Amoah and Ernest Agyekum Amponsah, who graduated from the premier University in 2012 set up the factory with the aim of processing cocoa which is the country’s pride.

Interestingly, Opoku and Ernest have no prior experience in the processing of cocoa as they have neither worked nor being associated with a cocoa processing factory in anyway.

They neither offered courses in Agriculture; instead, they have degrees in Political Science and Linguistics from the same University.

Their company, Qualiford Ghana, produces the Y-Choco brand of chocolates which is currently available on the markets.

The brands of chocolate have been approved by both the Ghana Standards Authority and the Food and Drugs Authority (FDA).

The CEO of the company, Kwabena Amoah told GhanaNewsPage.Com Editor, Kwaku Nti that they succeeded in processing and producing chocolate after years of research into cocoa.

“I love research and so do my partner, we have spent years researching into Cocoa as a crop and what we can do to make it more beneficial to Ghanaians and once again help Ghana gain its rightful place as the home of cocoa…,” he told GhanaNewsPage.Com in an exclusive interview.

Narrating the history of the company to GhanaNewsPage.Com, the man who stayed in Commonwealth Hall and established the hall’s first radio station, V City Radio, station said:

“Y-Choco as you see it today did not just happen, it took years of research upon research to get here. I remember the very day when we decided to go into producing cocoa products, we borrowed money just to produce chocolate and sell at the inauguration of President Akufo-Addo, but before we could sell the product, it had changed its nature so we had to come back home so we will change it into cocoa drink and you here [referring to our Editor, Kwaku Nti] was part of the team that helped us to sell but we run at a lost…,” he narrated.

Kwabena Opoku further recounted how he and his partner had to go beg the man who borrowed them GHC1000 for the project to give them sometime so they come to settle the debt later.

Four days after incurring the ‘unprecedented’ loss, Opoku and Ernest commenced the process of manufacturing solid chocolates after they had gathered the ingredients used for chocolates already in the market from various supermarkets.

Almost four years after that sad episode, the young graduates with the help of a local steel manufacturer, Hammer, can boast a factory that processes raw cocoa beans into finishing products.

Their brand of chocolate, Y-Choco has been approved by many Ghanaians including Ministers, Civil Servants, Musicians and top radio presenters including host of Peace FM’s Morning Show, Kwami Sefa Kayi.

“These are the kind of people that need to be supported by the government, their chocolate is of a higher quality and you can actually feel the cocoa in the product,” he said after receiving well packaged brands of Y-Choco.

The Chairman General further commended the young men and urged them to continue to engage in what ‘they love doing best’.

Seasoned Akan News Caster, who is also the General Manager of Angel 102.9FM, Kwadwo Dickson and several others have also endorsed the product.