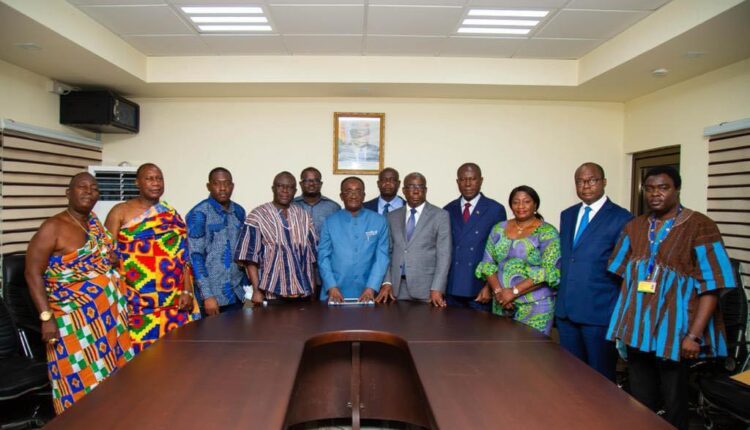 The Minister of Food and Agric, Dr Owusu Afriyie Akoto has sworn in an 11-member new Board of Directors for Ghana Cocoa Board (COCOBOD), at a brief ceremony in Accra.

The 11-member team comprising 10 male and one female is chaired by Mr Peter Mac Manu, who succeeds Mr Hackman Owusu-Agyemang.

The Agric Minister has charged the new Board to continue to build upon the success attained by the previous Board of Directors, whose tenure spanned 2017 to 2021.

“The 2020/2021 crop year production is a turnaround in the country as it brings hope to cocoa farmers,” Dr Afriyie Akoto noted.

“Great efforts were put in to attain this feat which is mainly as a result of our extensive agronomic practices and initiatives such as, rehabilitation, hand pollination among others”, he added.

Dr Afriyie Akoto highlighted the financial constraint that has put some License Buying Companies (LBCs) in a weaker position and which needed to be tackled.

“Financing LBCs to purchase Cocoa Beans is an area that needs to be looked at immediately to reduce constant complains from farmers,” he stressed.

According to him, the Cote D’Ivoire-Ghana Cocoa Initiative which was climaxed with the signing of the Headquarters Agreement in Accra is a major step towards the implementation of the Living Income Differential (LID) and implored the Board to work closely with the Secretariat for the Initiative to advance policies to improve upon the incomes of cocoa farmers.

The chairman of the new Board of Directors, Mr Peter Mac Manu, was grateful to the President, Nana Akuffo-Addo and the Minister of Food and Agriculture, Dr Owusu Afriyie Akoto for the opportunity offered to serve the country and the Cocoa Industry.

He lauded the previous Board the feat achieved and promised on behalf of the newly inducted members of the Board of Directors of Ghana Cocoa Board to also leave a footprint in the industry as their predecessors have done.

According to Mr Peter Mac Manu, the measures put in place by the previous Board Chairman, Mr Hackman Owusu-Agyemang, including the Productivity Enhancement Programme have significantly contributed to the success chalked in the 2020/2021 cocoa season.

“The policies administered by my predecessor has contributed positively to farmer’s production and income which is of key interest to this administration and looking forward to build on it,” Mr Manu emphasized.

“I want to maintain the current production in the country and I believe with the help of such a strong team with much experience in the industry, we will increase it,” added Mr Peter Mac Manu, the Chairman of the Board of Directors of COCOBOD.

Serving with the Chairman, Peter Mac Manu, on the Board of Directors are the Chief Executive of COCOBOD, Joseph Boahen Aidoo; the Governor of the Bank of Ghana, Dr Ernest Addison; and Charles Adu Boahen, a representative of the Ministry of Finance.

A businesswoman and the only female member of the previous Board, Nana Adwoa Dokua, was inducted for a second term as a Government nominee together with the Member of Parliament for the Suhum Constituency, Hon. Kwadjo Asante.

Representing cocoa farmers on the new Board of Directors are Nana Johnson Mensah and Nana Obeng Akrofi.

5 Business Ideas For Wealth Creation In The Cocoa Sector