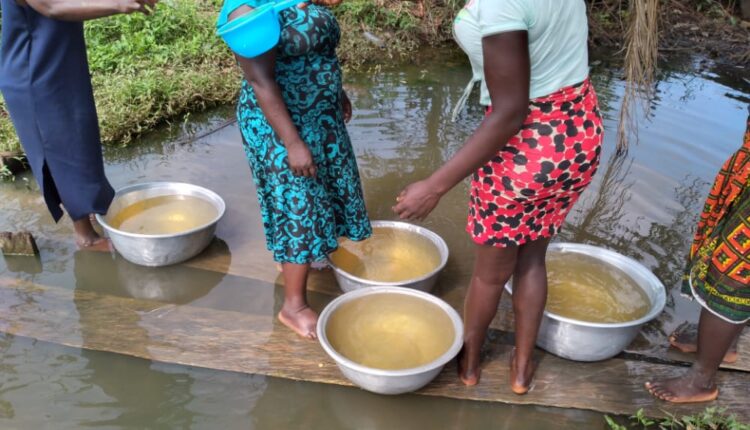 Scores of cocoa-growing communities in the Sefwi Akontombra District of the Western North region of Ghana are in dire need of basic life necessities, most especially potable water supply.

Communities like Krobomanhyia, Akwasiaha, Aboduam, Say-Gab, Nyame Nhyirawo, Omanhene and many others are without basic amenities. Potable drinking water is a scarce resource in these farming communities.

Residents at Krobomanhyia, a community of about 9000 inhabitants, say they trek several kilometres daily to fetch untreated water from ponds and streams, which they use for household chores and drinking.

For safety reasons women, who also work the cocoa farms besides their routine domestic chores, travel in groups on their expedition for water.

With the onset of the rainy season, the cocoa-growers complain of the dangers associated with the daily trip to the ponds, as women carrying water-filled basins often trip and fall on the slippery trails.

The Luxury of Potable Water

Margaret Quaye, 54, a mother of four lamented, “the ponds are infested with leeches, tadpoles and other organisms. We have made incessant appeals to authorities to come to our aid, but it has often fallen on deaf ears.”

“The water supply situation gets even worse in the dry season when most of the streams and ponds we rely on dry out,” she said.

He claimed the ordeal of the communities had motivated him to personally solicit donations from friends and contacts to provide hand-dug wells for a handful of villages including Sefwi Aprutu, Kordjour, Bonwire, Nkwadum and Shedkrom

According to Mr Debrah, aside from the challenge with water supply, these cocoa communities also have to grapple with the lack of other basic amenities like health centres, schools, electricity, telecommunication connectivity, roads, among others.

In spite of the difficulties, however, the communities in this local government district have been dutiful in delivering on their single KPI – cocoa production – which gets rewarded with low prices by the markets.

One of the communities, Sefwi Akwasiaha in the Akontombra district, produced on average 15,000 bags of cocoa, approximately 960,000 kilogrammes, per annum.

The Krobomanhyia community also produced an additional 9000 bags or 576,000 kg of cocoa beans on the average yearly.

The premium quality Ghana cocoa produced by some 800,000 farming families across the country serve as raw material for the multi-billion dollar chocolate and confectionery industry overseas, but the wealth they are responsible for generating never trickles down to them.

Maame Abena Pomaah, 78, a mother of 6 and grandmother of 15, said she has worked in cocoa farms almost her entire life.

The single-room mud house she calls home has no water, electricity and other basic amenities.

Madam Pomaah regretted, although, it is the will of the people to invest in a borehole water system, they hardly made enough from the sale of their produce after paying off labour and agro-input costs, often leaving them in a debt trap with loan sharks.

For years cocoa beans from these communities have added to making Western North Ghana’s leading producer of cocoa beans by region.

But not anymore. The region is reeling under the devastation of the swollen shoot virus disease (cssvd), which completely destroys the productivity of affected farms.

The Swollen shoot disease cannot be treated with agrochemicals. The only solution is to cut down the tree and replant.

An ongoing study by Ghana’s cocoa regulator, Cocobod, last week revealed that out of a total of 256,000 hectares of cocoa farms surveyed in the region so far, 156,000 hectares representing 69 per cent have been affected by swollen shoot.

The regulator has come through with a much-needed intervention known as the Cocoa Rehabilitation Programme, whereby affected farms are cut down and replanted at the expense of Cocobod.

However, it takes some three or so years before rehabilitated farms become productive again in order to get farmers back to work.

But until there is a drastic paradigm shift in the international cocoa trade system and a semblance of equity in wealth distribution injected, Western North’s golden tree farms are definitely going to return to ‘laying’ the golden beans, but so will the farmers resume a life totally robbed of dignity where basic amenities still remain a luxury.