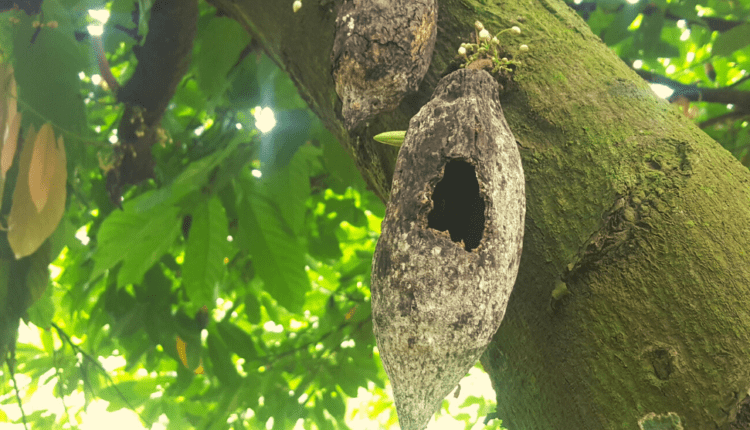 Ghana Cocoa Board has stepped up its cocoa rehabilitation programme in the Western North Region following the devastating effect of the cocoa swollen shoot virus disease (CSSVD).

The region had over 500,000 hectares of cocoa farms and produced one-third of Ghana’s total cocoa output.

However, production in the region has been declining sharply in the last decade.

Out of a total of 256,000 of cocoa farms currently in the region, 156000 hectares representing 69 percent have been affected by the swollen shoot virus disease, according to a survey by COCOBOD.

“I remember some years ago Western North alone gave Ghana about 350,000 metric tonnes (of cocoa). But today you can’t talk about that. Last year I remember we produced just 140,000 metric tonnes. So you can see that drastic reduction”, the Western Regional Manager of COCOBOD, Kwame Owusu Ansah, recalled.

One of the worst-hit areas identified in the survey is Essam. The last harvest season, the district produced only 30 bags from its previous production of 54,000 bags.

Steven Awuah is a cocoa farmer in the Essam District. Before his farm was affected by the cocoa swollen shoot disease, he was harvesting over 300 bags every season and laments how he hardly even gets a single bag now due to the disease.

Farmers in the cocoa-growing districts lament how thousands of hectares of cocoa farms have been lost to the disease. Unfortunately, there are no agrochemicals to control the disease.

The only option is to cut down the trees and replant. COCOBOD has thereby introduced the cocoa rehabilitation programme.

“The idea is that we are cutting all the infected trees in the cocoa-growing areas, and replanting them. This is exactly what we have done. COCOBOD is providing some incentive to the farmers. We are cutting for the farmers for free and apart from that, we are paying compensation. For every one hectare that we cut we pay the farm GHS1,000. And we also pay the landowners”, Mr Owusu Ansah explained.

The regional manager noted that the division has exceeded its target of affected farms to rehabilitate and is hopeful the programme will help restore the levels of cocoa production in the next three years.