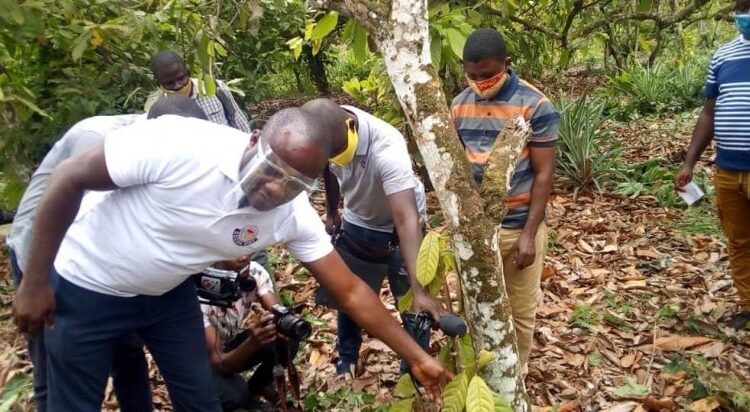 Ghana Cocoa Board (COCOBOD), has rolled out a cocoa rehabilitation programme of cocoa farms affected by the swollen shoot disease in the Western North Cocoa Region.

As part of the cocoa rehabilitation programme, COCOBOD has directed all diseased cocoa trees to be cut down for the re-planting of new hybrid cocoa seedlings.The Western-North Regional Manager in charge of Cocoa Health and Extension Division (CHED) of COCOBOD Mr Kwame Owusu -Ansah disclosed to journalists during a tour to inspect cocoa farms in three districts of the Region.Mr Owusu-Ansah said the Western-North Region used to contribute one-third of cocoa production in Ghana but had been moving a downward trend for the past three years due to the swollen shoot disease.The Regional Manager bemoaned the dwindling fortunes of the region in terms of production on account of the swollen shoot disease.

Mr Owusu -Ansah said if the current situation was not salvaged, nothing would be left for the farmers and the industry in the next three to four years.As part of the cocoa rehabilitation programme, he said COCOBOD had outsourced the tree cutting activity to a private contractor at a cost of GH¢700. 00 per hectare.COCOBOD has also engaged 4,500 labourers within communities in the districts to weed the cocoa farms for rehabilitation works to commence.The Regional Manager lamented that the healthy cocoa in the Region was only 20% which demanded a concerted effort to reverse the trend.He said as an alternative source of livelihood, COCOBOD had supplied free plantain suckers to the affected cocoa farmers to plant with the new Cocoa hybrid seedlings to be planted under the plantain, which would serve as economic shade trees for two years after which COCOBOD would release the farms to their owners.He said COCOBOD had also decided to make compensation of Gh¢1,000.00 per hectare to farmers and the same amount to landowners.The Public Relations Officer of COCOBOD, Mr Benjamin Larweh said the devastating nature of the swollen shoot disease and how to salvage the situation, was of much concern to industry players.He, therefore, asked the farmers to cut down the affected trees as there was no proven antidote to the disease.At Nyametwa, the Chief cocoa farmer, Nana Yaw Barima appealed to the government to extend the two-year period to either three or four years before handing over the rehabilitated farms to farmers.Nana Barimah who is also the Gyasehene of the community urged the government to start cutting down the trees immediately instead of waiting till December.

Powerful Anti-Cancer Effects Of Cocoa Everyone Must Know