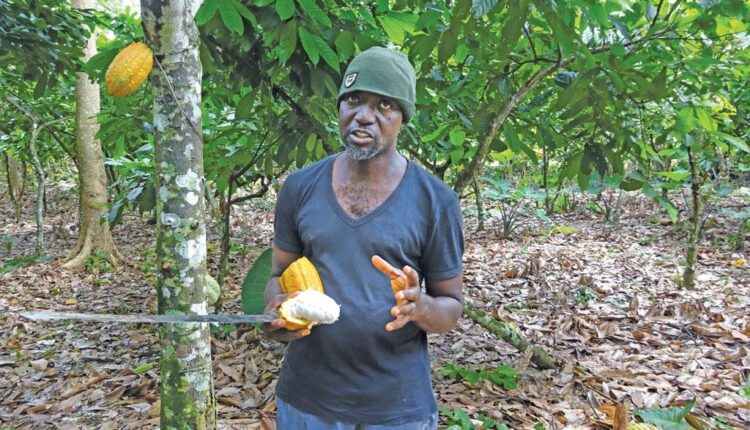 Cocoa farmers have appealed to Ghana Cocoa Board (COCOBOD), the industry regulator, to increase the producer price of cocoa beans in the coming 2020/2021 season by a significant margin.

According to the farmers, cost of production has skyrocketed in recent times; and besides, the general standard of living among farmers is deteriorating and therefore it’s imperative for COCOBOD to grant a cocoa price increase so as to help transform the lives of poor farmers.

This, they say, will attract the youth into cocoa farming to reinforce the aging farmers’ population.

The 2019 National Cocoa Best Farmer, Ernest Sarkodie at Sankore in the Ahafo Region, during an interview with the B&FT said: “Cost of inputs such as insecticides and pesticides have soared significantly. We need more money to buy the required quantities to supplement supplies from government in controlling pests and diseases. If COCOBOD can cushion the price to between GH¢700 and GH¢900, we’ll appreciate it”.

For his part, 2019 Best Regional (Ahafo, Bono and Bono East) Cocoa Farmer, Philip Appiah Boakye, at Akrodie in the Ahafo Region said: “Scarcity of labour has pushed his cost higher. Cost of labour keeps rising year-on-year-on; farm labourers have increased their daily wages from GH¢40 to GH¢50 to GH¢60. Easy access to farm labourers within our locality is for the highest bidders”.

He expressed concern that the escalating cost of labour could push some farmers to revert to using weedicides for controlling weeds.

He admittedly noted that use of weedicides on cocoa farms poses a serious threat to the country’s cocoa industry, and urged authorities to find pragmatic measures to address the challenge in order to discourage their use.

COCOBOD procured and distributed about 100,000 pieces of dual-purpose motorised slashers and pruners to cocoa farmers across the cocoa regions.

The equipment’s introduction is to help phase-out the labour-intensive use of machetes for weeding and pruning on cocoa farms.

When asked about the slashers, a farmer commended COCOBOD for the initiative but indicated: “The machines cannot be applied on every cocoa farm.

Most of us practice mixed cropping by growing other food crops, like cocoyam and cassava, on cocoa farms. Using the slashers on such farms will end up clearing the food crops”.

Mr. Sulley Mustapha is farmer at Wamfie in the Dormaa East district of the Bono Region. He stated that: “In the last twelve months, the price of liquid fertiliser per gallon has jumped from GH¢120 to GH¢150; the price of a cutlass used to be GH¢19, but now it hovers around GH¢23-GH¢25.

Besides, the cost of transportation has also surged; and therefore it is economically wise for COCOBOD to respond with a price increase commensurate with the rising cost of production.”

The farmers expressed optimism for increasing their production in the coming season. The actualisation of the farmers’ vision would help COCOBOD achieve its target for the season under consideration.

On Wednesday, August 12, 2020, Parliament approved a loan of US$1.3billion from a consortium of banks and financial institutions for COCOBOD to purchase cocoa beans for the 2020/2021 season.

The Board estimates to purchase about 900,000 metric tonnes through Licensed Buying Companies (LBCs).

“I’m leveraging COCOBOD’s Productivity Enhancement Programmes (PEPs) such as hand-pollination, pruning and fertiliser distribution to achieve the target. The hand-pollination exercise has so far covered about 50 acres; it is still ongoing.”

“I’m very optimistic about meeting this target; I have employed the services of pollinators to support the efforts of personnel recruited and paid by COCOBOD. Pruning has been done to the specification of extension advice,” he added.

Quantity Or Quality of Production – Does Any Of These Improve Cocoa Farmers’ Income?