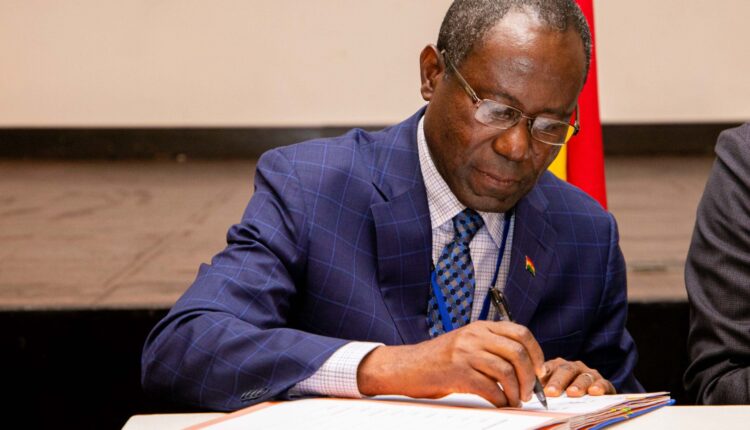 The Auditor-General of Ghana, Johnson Akuamoah Asiedu, has raised concerns about the Ghana Cocoa Board’s (Cocobod) increasing debt burden – which stood at approximately GH¢12.30billion as of September 2020.

The debt accumulation emanates from short-term cocoa loans of about GH¢8.49 billion; BoG 10-year loan of almost GH¢1.4billion; medium-term loan in a total of GH¢1.28billion; as well as an AfDB loan of GH¢1.14billion and BADEA Loan Account of GH¢174,295.

“Our examination of the COCOBOD records noted that the Board has been burdened with relatively high loan portfolios over the years. The Board had debts totalling GH¢12.3billion in its records as at end of the 2019/2020 financial year. We also noted from our review that the Board did not provide us with any effective plans to reduce its debt burden into the future,” the Auditor-General report said.

“This, if not managed effectively, could lead to crippling the cocoa industry. The absence of sustainable debt plans coupled with the absence of effective long-term cost control measures resulted in this state of affairs. We urge management to deploy and implement effective plans and strategies which lead to a reduction of the Board’s debt burden within the medium- to long-term,” he encouraged.

However, the management of COCOBOD indicated in a response that the institution is implementing tighter budgetary controls, to ensure that debt is not accumulated but rather make savings to repay all debts in its books.

Some of the strategies include issuing a bond of up to US$ 3 billion to refinance the relatively expensive cocoa bills. The long-term debt, which is relatively cheaper, is expected to be used for refinancing the short-term cocoa bills that are expensive.

In the case of the 10-year BoG loan, COCOBOD noted a balance of about GH¢1.39billion which is being serviced based on a repayment schedule agreed with the Bank of Ghana. The moratorium on repayment of the principal amount expired in January 2022; however, it expects to fully extinguish the loan by November 2023.

The total balance of non-current and current liabilities on the medium-term loan (MTL) of GH¢1.2 billion has been settled, according to COCOBOD.

“As a result of the prudent financial management being implemented, the MTL has been fully repaid 1 year ahead of schedule,” the Board said.

On the BADEA loan, COCOBOD notes a possible write-off for the debt, following an agreement with the Ministry of Finance and subject to Parliamentary approval.

In the 2020 financial year, COCOBOD recorded a loss of GH¢426million as compared with a loss of GH¢320million registered in 2019.

This represents a 33 percent decrease in the Board’s financial performance over the period.

Even though COCOBOD recorded a 4.41 percent fall in cocoa production over the previous year, the rise in revenue was largely attributed to a higher export price per tonne of US$2,477 in 2020 compared with an average export price of US$2,236 for 2019.

The Board’s liquidity ratio (Current ratio) improved from 0.75:1 in 2019 to 0.82:1 in 2020. The increase notwithstanding, the Board will not be able to meet its short-term obligations as and when they fall due.