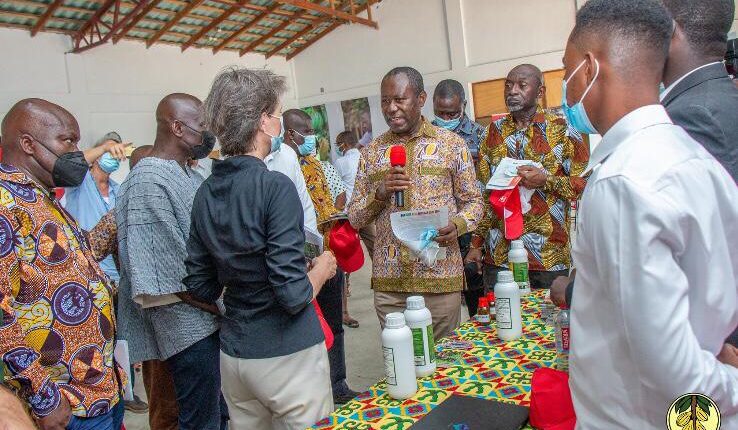 Ghana Cocoa Board (COCOBOD) has made the case for Switzerland to consider deepening its economic relations with Ghana by partnering with the country to establish more cocoa processing plants.

Increasing local processing of cocoa beans is in line with Ghana’s value addition agenda to capture more wealth from its produce.

Eighty percent (80%) of the West African country’s annual crop output export is exported to the European Union where it is processed and used in the manufacturing of numerous products, including confectionery.

According to government sources, the local processing threshold has increased in recent times from twenty-five percent (25%) to forty percent (40%) with the hope of hitting the fifty percent (50%) target in the shortest possible time.

Last year while on a state visit to Switzerland, Ghana’s President Nana Akufo Addo, made the global headlines when he told the world Ghana no longer wants to be dependent on the production and export of raw materials including cocoa beans.

It is in with that objective that the Chief Executive of Ghana Cocoa Board (COCOBOD), Mr Joseph Boahen Aidoo, extended the invitation to Switzerland to strengthen its existing economic ties with Ghana by supporting the effort of the Ghanaian government to expand the local cocoa processing and value addition sector.

He explained that such support could be in the form of partnerships to establish more processing factories in Ghana to feed the international market with semi-finished or finished cocoa products.

With Swiss partnership, Mr Aidoo observed other areas that could be explored are the promotion of organic and sustainable practices on cocoa farms; the modernisation of cocoa farming, particularly, through the provision of irrigation systems; and advocating for farmers to earn a decent income from their produce.

The COCOBOD chief made this call when he and the visiting Swiss Minister for Environment, Transport, Energy and Communications, Simonetta Sommaruga, led a delegation to tour an organic cocoa farm, the Yayra Glover warehouse and the Fairafric chocolate factory at Suhum, in the Eastern Region.

The tour was organised as part of a four-day working visit to Ghana by the Swiss Minister. Also on the tour was a delegation from the Swiss Embassy in Ghana, including the Ambassador, Philipp Stalder.

Mr Aidoo said the visit by the Swiss minister is timely because it has coincided with the period when Ghana is engaged in discussions with the European Union (EU) on sustainable cocoa production.

He noted the policies of COCOBOD are aligned with the global common agenda to maintain and improve forests.

As such, CocoBod is championing the practice of agroforestry in Ghana.

The Chief Executive maintained that contrary to popular perception in Europe, cocoa trees are forest trees that grow best in the company of other forest vegetation and that is why farmers grow other crops on their farms and as well grow permanent shade trees.

He argued that satellite images reveal that the parts of Ghana which have lost most of their vegetation over the years are parts where cocoa is not grown, but through cocoa agroforestry, these parts can be re-forested and their vegetation restored.

Mr Aidoo said COCOBOD has intensified its education and awareness creation to farmers especially on the advantages of organic cocoa farming, noting the potential negative effect of the use of herbicides and weedicides on biodiversity.

She stated with the growth in global demand for more organic products, it is important that Ghana continues to encourage more organic cocoa cultivation.

She said Ghana and Switzerland have signed an agreement on climate change which means that her country will invest in climate protection projects in Ghana.

“This agreement is good for both Ghana and Switzerland”, she noted, “and for sustainable investments. I’m very glad because cooperation between our two countries works very well.”