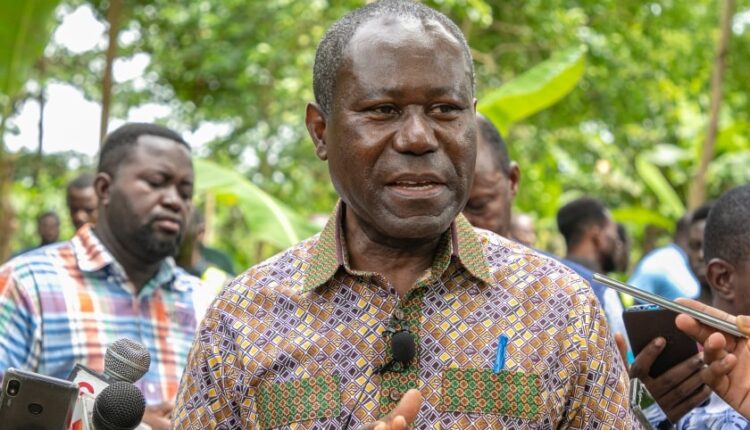 Ghana Cocoa Board (Cocobod) is set to commence a process to hand over 51,000 hectares of successfully rehabilitated cocoa farms to owners.

The cocoa farms are part of some 136,000 hectares of moribund and Cocoa Swollen Shoot Virus Disease (CSSVD) infected cocoa farms in the Western North Region.

The planned handing-over comes after a successful two-year-long rehabilitation intervention under the COCOBOD and government-backed National Cocoa Rehabilitation Programme.

So far, a total of 51,537.85 hectares of formerly diseased and over-aged cocoa farms have been sustainably rehabilitated with new hybrid cocoa seedlings, plantain and desirable shade trees.

Interacting with cocoa farmers at Kumikrom in the Sefwi Bekwai District, Cocobod boss Joseph Boahen Aidoo disclosed that it was time for early beneficiaries of the rehabilitation programme to take over the management of their farms.

He asked the farmers to adhere strictly to good agronomic and agroforestry practices to ensure that the farms can produce at their optimum capacity without adverse impacts on the environment.

Rehabilitation of diseased and over-aged cocoa farms constitutes a major factor Ghana in 2019 secured a receivables-backed $600 million loan from the African Development Bank (AfDB) to revamp the cocoa sub-sector.

Out of the total amount, about $230 million is being used to rehabilitate some 156,400 hectares of diseased and overage cocoa farms across the country.

Prior to the commencement of this rehabilitation, it was estimated that Ghana had more than 2.5 million hectares of land under cocoa cultivation, of which about 1.45 million hectares are considered to be productive.

Cocobod Chief Executive, Joseph Boahen Aidoo, made the announcement during a two-day tour of cocoa farms in the Western North Region.

He inspected a 145.8-hectare rehabilitated cocoa farm at Kumikrom in the Sefwi Bekwai District of the region.

The inspection is part of a regular field and farmer engagement tour of some cocoa communities instituted by the COCOBOD Chief Executive.

Also through such regular field visits, authorities are able to inspect the progress of some cocoa road projects in the region.

Curtailing the Spread of CSSVD
The National Cocoa Rehabilitation Programme, which was officially launched by President Nana Addo Dankwa Akufo-Addo in October 2020, was devised by COCOBOD to curtail the rapid spread of CSSVD on cocoa farms.

The process begins with the cutting of infected trees and the stumps treated with arboricide.

The farms are then replanted with disease-tolerant, early bearing, high-yielding cocoa varieties.

During the two-year-long rehabilitation process, COCOBOD bears the full cost of all the activities on the farm as well as the cost of labour.

Besides the primary goal of stopping the further spread of the disease and restoring the productivity of CSSVD devastated farms, the programme also safeguards the livelihoods of cocoa farmers, helps to ensure better food security through the planting of plantains, tubers and grains during the first two years as the cocoa trees grow.

Hundreds of thousands of jobs have also been created for the youth in cocoa communities, who provide labour and technical support to rehabilitate the cocoa farms.

Rehabilitation Compensation
The sector regulator also pays an amount of GH₵1,000 per hectare to farmers who agree to have their infected farms taken over for rehabilitation.

In the case of tenancy, both affected tenant farmers and their landowners are compensated.

Across the country, 315,886 hectares out of a total of 1.9 million hectares of cocoa farms had been lost to CSSVD.

A survey conducted in 2017 found that more than half of the 509,295.53 hectares of cocoa farms in the Western North Region had been infected.

Mr Boahen Aidoo also told the farmers that Cocobod is set to scale up its irrigation programme for cocoa farms to ensure an all-year-round water production and increase in yield.

He touted the intervention, which has already been piloted, as a solution to counter climate change-induced drought which is adversely affecting crop health and yield.

According to him, a well-rehabilitated farm with irrigation has the potential to fetch about 1,800 pods on one tree, which would yield 40 bags of cocoa beans per acre to improve income and living conditions.

Mr Aidoo commended the farmers for adhering to productivity enhancement practices like pruning and advised them to halt intercropping cocoa with cassava.

He cautioned against the use of unfriendly farming practices such as the application of unapproved chemicals on the cocoa trees.

Later addressing a durbar of the chiefs and people of Suaman-Dadieso, Mr Boahen Aidoo, appealed to traditional rulers to stamp their authority to uproot the galamsey menace, especially in cocoa-growing areas of the country.

According to him, galamsey activities continue to wreak havoc on cocoa farms, which is taking a toll on the cocoa industry.

He said as custodians of the land, traditional authorities wield more power and owed it a sacred duty to conserve, preserve and protect the land from all forms of degradation.

Mr Aidoo bemoaned the situation where many of the cocoa farmlands had been depleted with the indiscriminate cutting of cocoa trees for galamsey activities.

He was worried about the considerable decline of cocoa production in the Western North Region, which used to produce a third of Ghana’s cocoa.

The Chief of Suaman-Dadieso, Nana Kofi Armah, lauded the efforts of COCOBOD to streamline issues in the cocoa industry to boost production.

He admitted that the galamsey menace had become a source of worry to farmers in the region.

At Tawiah-Krom, Mr Boahen Aidoo assured the cocoa farmers that COCOBOD would continue to design human-centred policies as part of the Productivity Enhancement Programme to boost cocoa production and create more employment for better living conditions for people in cocoa-growing areas.

Roads in the Western North Region have seen a major boost under the ‘Year of the Roads’ project touted by President Akufo-Addo.

As a result, cocoa farmers can cart their farm produce to licensed buying companies on time.

Mr Aidoo said this when he inspected works on the 38-km Benchema-Adjoafua road, explaining that the stretch of road is the heart of the cocoa industry and would be completed in no time.

He said the $43-million project is funded by COCOBOD and the Government of Ghana and commended the contractor, Amandi Construction Works, for the quality of work and the solid layer used to asphalt the road.

He indicated that reports from drivers of long trucks loaded with cocoa found it difficult to climb the hills on the serpentine portion of the road in the past.

The CEO said the construction of a steel bridge at Bia, which used to be narrow, is underway and would be completed in the coming months.

Mr Boahen Aidoo said the government had done well in terms of roads and rejuvenated cocoa farms and assured cocoa-growing areas of witnessing unprecedented construction works on their roads in the coming months.