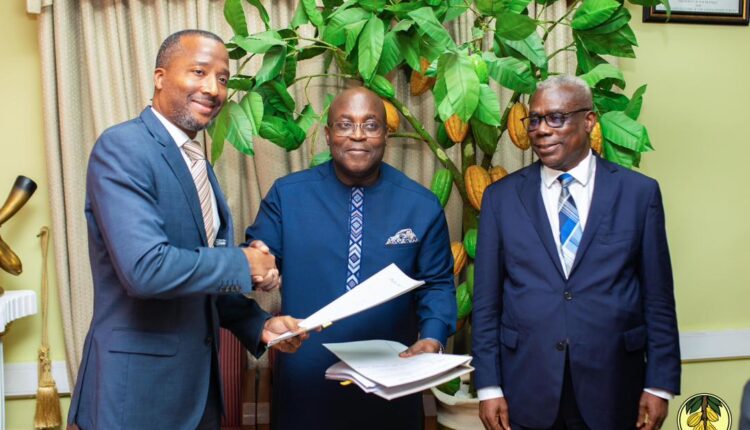 The $1.13 pre-export receivables backed trade finance facility was pooled by a consortium of international financial institutions at a slightly higher cost of SOFR plus 1.75 per cent compared to a fixed rate of 1.5 per cent in previous transactions.

“The Facility was launched to the market on 23rd August 2022 at a launch amount of USD 1,000 million. Following the close of syndication, COCOBOD elected to upsize the facility to USD 1,130 million as a result of oversubscription achieved,” officials explained.

The figure is $170 million short of the $1.3 billion the Board sought parliamentary approval for a few months back.

Proceeds of the COCOBOD syndicated loan would be used to assist in meeting the Board’s financing needs for the 2022/2023 cocoa crop and other cocoa-related operations.

Chief Executive, Joseph Boahen Aidoo, said despite the challenges facing the cocoa sector, brought on by the global financial difficulties, the sector has once again shown leadership.

“This year, in particular, has been very scary for Ghana Cocoa Board, in the sense that we have experienced one of the severest Harmattan in 5 or 6 years, and therefore outlook for 2021/22 has not been very impressive,” the Cocobod boss explained.

“For the first time, we are getting output below the average of 800,000 MT in the past 6 years, which is very unimpressive.”

Mr Aidoo confessed going to the financial market this year was a daunting task for the entire organisation, particularly in the backdrop of the financial difficulties the country itself is facing.

He assured of effective and efficient use of the funds, adding that efforts will be made to improve on performance in the newly-commenced crop season.

Respite for the Cedi

Beyond funding cocoa purchases, the $1.13 billion Cocobod syndicated loan is also hoped to help shore up the local currency – Ghana Cedi – which has lost 40.05% in value to the US dollar in nine months of 2022, ranking it as the second worst performing currency in the world in the 147th position, according to Bloomberg.

Central bank governor, Dr Ernest Addison, is hopeful that funds from the cocoa syndicated loan will help stabilize the Cedi, while hopeful of a turnaround in the fortunes of the currency.

The Minister of Finance, Ken Ofori-Atta, witnessing the signing ceremony in Accra, said the facility “puts the nation’s finances in the right landing zone and gives impetus for optimism in the Ghanaian economy.”

He confirmed the government’s long-term and continuous support to COCOBOD and to the domestic cocoa industry given the sector’s long-standing critical role in the Ghana economy.

COCOBOD is a Statutory Public Board established in 1947 and is under the responsibility of the Ministry of Food and Agriculture which supervises Ghana’s cocoa industry.

In addition to COCOBOD’s principal functions of purchasing, marketing and exporting cocoa, it also promotes the production of the commodity, focusing on the maximisation of cocoa production and crop yield through agronomic research programmes and major logistic management investment.

Ghana is the second largest producer of cocoa beans in the world, providing about 20% of the world cocoa supply in 2020/21.

Cocoa is a strategic commodity for Ghana, being the second largest export revenue generator after gold, and also serves as one of the largest employment-generating sectors at various levels of the value chain.

There are approximately 800,000 farm families (mostly smallholders with less than three hectares) whose livelihood depends on cocoa.

The welfare of the cocoa farmer is hoped to be improved with the implementation of the Living Income Differential (LID) in the 2020/21 crop season guaranteeing a realistic living income for farmers and thereby ensuring the sustainability of the cocoa trade.