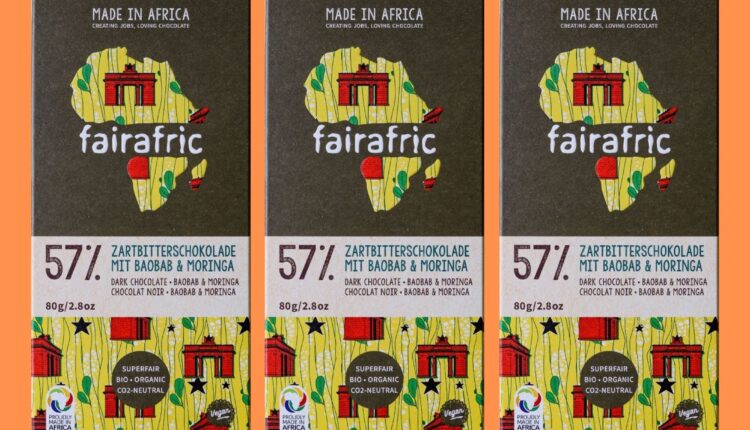 Ghanaian-German social enterprise, fairafric Ghana, has unveiled the first of three exciting new flavours of its Made In Africa chocolate brand.

The cocoa origin chocolate maker took to its social media handle to make the anticipated announcement:

“Our first new variety is: 57% Baobab Moringa. 1957 is Ghana’s independence year – and we want to celebrate it with a revolution for your taste buds!” the LinkedIn post read in part.

According to historians, Ghana’s independence from British colonial rule is highly significant.

It heralded the continental independence movement leading to many African nations breaking free from the shackles of European oppression.

Under the leadership of its first President Osagyefo Dr Kwame Nkrumah, Ghana then known as Gold Coast, became the first country south of the Sahara to attain political independence.

Following in the stead of its host country, Ghana, fairafric became the first chocolate manufacturing company to site its factory in a rural cocoa-growing community in the country’s Eastern Region of Ghana – Suhum.

Fairafric touts itself as changing the system by revolutionizing the chocolate world with its unconventional model of producing world-class chocolate in Ghana for the world.

“Africa’s raw materials have always been used primarily for the production of goods in the Global North. That is why it is important to us to go one step further, to process raw materials locally and to transfer the added value as far as possible to Africa,” fairafric said on its official portal.

“In doing so, we create jobs outside agriculture and multiply local income in the country of cocoa origin. With every purchase of fairafric, you help to create qualified jobs in Africa, which in turn lead to higher income, better access to higher education and health care. No development aid, but a real opportunity,” it added.

The Ghanaian-German chocolate startup currently produces 40,000 bars of chocolates per day with a Ghanaian staff of 85, working with 861 farmers.

“We pay the highest cocoa premiums in West Africa: 600 USD per ton of cocoa. Thus, the farmers can finance second and third degree education for their kids,” fairafric stated.

Is A Potential ‘COPEC’ Up To The Task Of Protecting Cocoa Farmers?