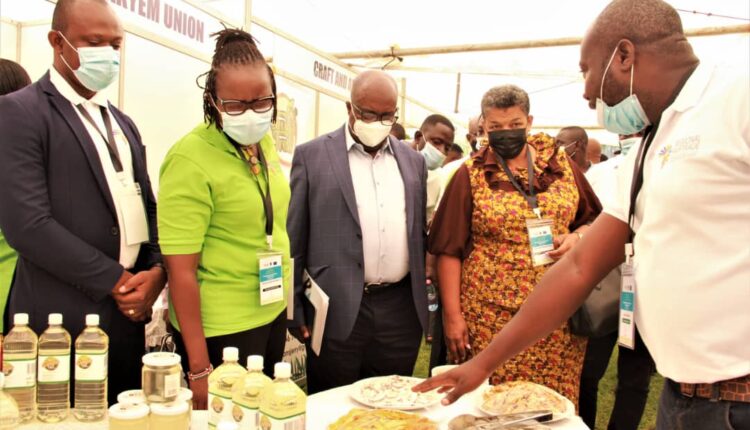 The programme organised by Fairtrade Africa West Africa Network brought together all Fairtrade and non-Fairtrade producers and other stakeholders within and outside the region, according to a press release copied to Cocoa Post.

It created a platform for participants to deliberate on contemporary issues affecting producers and to propose ways of advancing the businesses of producers and their partners.

Through the event, producers deliberated on new market opportunities, linkages with entrepreneurs in agri-processing as well as issues on advocacy, youth and gender-related issues within agricultural supply chains.

“The West Africa Fairtrade Network has over the period mobilised its members to access capacity building on various topics relevant to our operations as Farmers and Workers, supported in the area of fundraising and engaged policymakers in an attempt to achieve favourable terms for producers,” he reported.

The Chief Director of Ghana’s Ministry of Trade and Industry, Patrick Nimo, lauded Fairtrade for its contribution to supporting farmers access trade and markets both within the West African subregion and beyond.

He urged producers to take advantage of the National Export strategy for export promotion and trade facilitation, as agriculture forms a major part of non-traditional exports.

Speaking on behalf of Fairtrade producers, Florence Blankson, who is the Vice President of the Fair Trade Ghana Network said, “the support received from Fairtrade came in handy during the lockdown period as markets were virtually closed down due to restrictions on movement.”

“Over 50,000 households received support in the form of food, hand sanitizers, soap and facemask. It is worthy to note that, Fairtrade also gave some concessions in relation to the use of Fairtrade premium by members and workers in order to make funds available to producer organizations for specific support initiatives towards their Members and Workers.”

She also assured producers of Fairtrade’s commitment to ensuring fairness in trade, advocating for living incomes and human rights and sustainable development in line with the new 2021-2025 Global Strategy that puts the producer at the heart of all transformation and that focuses on digitalisation, impact data, transparency and traceability that is needed to drive agricultural growth.

The event also provided the opportunity for producers to be informed on the progress of the Fairtrade Africa 2021- 2025 strategy, which focuses on new product and market development, advocacy and policy, sustainable farming systems and strengthened and transformed producer organisations.

The organisation noted that since the onset of COVID19 many producers have been supported by Fairtrade to build resilience on different fronts.

Fairtrade said it provided relief and resilience funds through internally generated funds from the Fairtrade system and also through donor partners that helped producers to identify alternative livelihoods as well as build their capacity in areas such as climate adaptation and regenerative agriculture.

Again it said, through the Fairtrade Relief fund, SECO fund and Recover Africa Fund, both Hired Labour Organizations and Small Producer Organizations were able to access financial support to respond to the needs of their Members and Workers.

The SECO Fund, Fairtrade Covid-19 Relief Fund and Recover Africa Fund were structured to support producer organizations to offer relief services such as the provision of hygiene and safety kits as well as food items to Members and Workers.

Fairtrade Recover Africa fund in particular also made available for producers to access training for additional livelihood projects and other income generation activities.

Initiatives such as the establishment of hydroponics on the farm, bakery, soap making, bead making and vegetable productions were just a few of the innovations embarked upon by the producer organizations with the use of the fund.

Also in attendance at the opening ceremony of the event was the Member of Parliament for Awutu Senya, Hon. Gizella Tetteh, as well as representatives from the Ghana Cocoa Board, the Ministry of Agriculture, Cocoa Research Institute of Ghana, GIZ, Agricultural Workers Unions (GAWU) and other partner organisations.

Cacao Made With Love From Finca Dos Vistas – Aripo, Trinidad