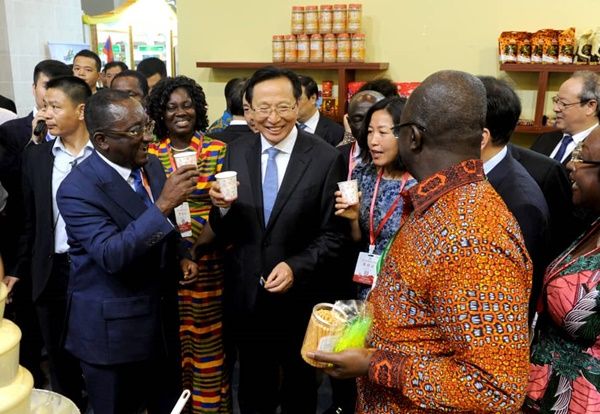 Ghana has been participating in the 2019 Tea Expo being held at Hangzhou, China, as the second-largest cocoa producer in the world seeks new markets in Asia for cocoa and cocoa products.

Ghana was invited by the Chinese Government as a Special Guest Country.

The West African nation is poised to raise its revenue from the cocoa sector by adding value and exporting to new markets.

The government has thus set a 50% local processing target of the country’s prized quality cocoa beans.

China is top on the list of Ghana’s Asia market exploration for its cocoa and processed cocoa products.

The delegation included a strong contingent from Cocoa Processing Company, Ghana Cocoa Board, Private cocoa processor Plot Limited from Takoradi, MOFA, Ministry of Trade and others.

Ghana’s stand became the toast of the Expo with hundreds of Chinese visitors streaming through to taste our cocoa products.

On the day set aside to honour Ghana, the Chinese Minister for Agriculture and Rural Affairs Mr. Han Changfu and his deputy Dr Qu Dongyu visited the nation’s stand.

The huge crowds were entertained by a Ghanaian dancing troupe accompanied by traditional music, much to the appreciation and amusement of the Ministers and the teeming visitors.

The organisers of the Expo confirmed Ghana’s stand was by far, the most popular.