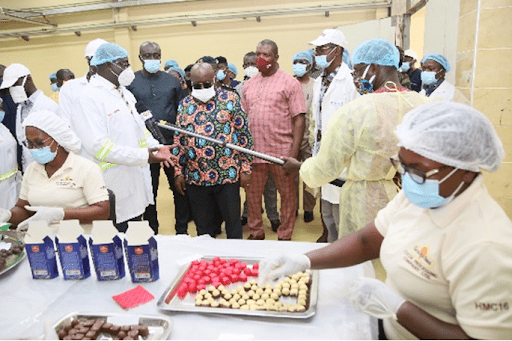 President Nana Addo Dankwa Akufo-Addo has assured the management of the Cocoa Processing Company (CPC) of the government’s support for the company to ensure that the processes and measures the company has instituted to turn around its fortunes are successful.

He said although the CPC inherited a debt of over $100 million in 2017, he was impressed by the measures already put in place to increase production, cut cost and improve the viability of the company to play a critical role in the government’s policy of value addition and industrialisation.

The President gave the assurance when he paid a working visit to the company in Tema yesterday to, as he put it, “listen to their challenges and what, therefore, can be done”.

“I’m really encouraged by the reports I’ve been receiving consistently of the big efforts, the courageous efforts you’re making to confront the past and yet build a successful future,” he said.

The visit was also to help Ghana’s quest to ensure that, together with Cote d’Ivoire as the two main producers of cocoa in the world, it could increase its share of benefits from the product.

The Cocoa Processing Company owes the Ghana Cocoa Board (COCOBOD) $88 million and is also indebted to some banks to the tune of about $20 million.

It was delisted from the Ghana Stock Exchange in 2015 for failing to meet its obligations, but it has been relisted after the current management had corrected the lapses.

President Akufo-Addo hinted of discussions with the Ministry of Food and Agriculture, COCOBOD and other related organisations, including banks, to position the CPC to be able to implement the measures that would help clear the debt and offer the company a clean sheet to continue with its development agenda.

He said cocoa had been the principal source of funds for the development of the country, and so to have such a company whose aim was to add value to the cash crop made the Cocoa Processing Company very strategic in the economic landscape of the country.

He spoke about what had happened in the post-independent era, when companies were not well managed, saying that when the current CPC leadership took over the reins of affairs, they were saddled with some challenges, including the over $100 million indebtedness.

That, the President explained, was not a small amount of money for any company to deal with, no matter its size, but added that he was encouraged by the reports of courageous efforts the CPC was making to confront the past and build a successful future.

He noted that the remarkable and productive efforts instituted by the current management should be publicised as a source of inspiration for many to know that there could be challenges, but the management had designed measures that were yielding results.

The President said the lessons were that if management had a clear-cut understanding of where the company wanted to be, it could find a way through, adding: “That’s what I’m hearing from you today, and I’m very encouraged and inspired by the story that the managing director has just put forward.”

The Managing Director, Nana Agyenim Boateng, said the company, with the consent of the Ministry of Agriculture, was sourcing for a $70-million Afriexim Bank loan for a fresh capital injection to replace and rehabilitate plant and machinery.

That, he said, would increase its output from 64,500 tonnes to 87,000 tonnes for production lines one and two and from 3,550 tonnes to 15,000 tonnes of Golden Tree Chocolate products for the confectionary line.

He said the company had increased its confectionary capacity, which was only 1,860 tonnes, that is, 2.9 per cent of the company’s production of 64,500 tonnes.

The CPC Managing Director said through the support of the ministries of Agriculture and Trade and Industry, the company had also received a stimulus package of $3 million and a loan of GH¢10 million for the replacement of one tempering machine, purchase and installation of a wrapping machine, an instaniser power plant and high-speed packaging machines to support its tertiary school feeding contract with the National Food Buffer Stock Company (NAFCO).