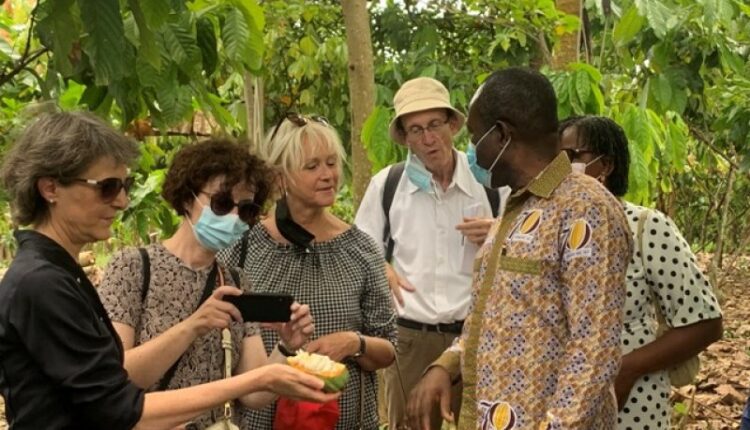 Data from the COCOBOD indicate that farmers who signed on to the pilot phase of the irrigation programme in the Western North Region are already reaping the benefits in terms of increased yields per hectare to an average of between 39-40 bags per hectare while indications point to higher prospects.

The intervention, which was in response to the adverse effect of climate change on Ghanaian cocoa production, also received some private sector support with Mondelez International Cocoa Life Program in Ghana also investing in pilot solar-powered irrigation projects for 15 partner farmers.

Ghana has a current average yield per hectare of 450kg, but COCOBOD plans to increase that to 1000kg per hectare with its Productivity Enhancement Programme (PEP) interventions, namely mechanised pruning, subsidised fertilizer, hand pollination and good agricultural practices.

The COCOBOD boss disclosed the updates when he hosted a visiting Swiss Federal Councillor, Simonetta Sommaruga, on a field trip to a cocoa farm in Suhum in the Eastern Region of Ghana.

The Ghana News Agency reported that Madam Sommaruga, who is the Minister for Environment, Traffic, Energy, and Communications of Switzerland, was in Ghana as part of a two-nation tour of Africa, which also took her to Senegal.

The visit offered her the opportunity to familiarise herself with actors in the cocoa production value chain including; farmers, aggregators, and companies under the Swiss Platform for Sustainable Cocoa (CFI/SWISSCO).

The COCOBOD chief noted that aside from farmers achieving optimal yield under irrigation, they stood the chance of harvesting throughout the year from the same farm, instead of expanding farm size that may contribute to deforestation.

He observed that water was crucial for cocoa farming and that COCOBOD was focusing on pushing for cocoa production under irrigation for farmers and called on development partners to join them in that venture to increase yields and improve livelihoods.

Mr. Aidoo said the irrigation pilot project was part of activities under the $600 million syndicated loan from JICA and the African Development Bank under the Enhanced Private Sector Assistance for Africa initiative.

The Chief Executive stated that events under the facility included the allocation of financing to sustainably increase cocoa plant productivity and the rehabilitation of aged and disease-infected farms.

Madam Sommaruga expressed the hope that the four-year strategy under the State Secretariat for Economic Affairs and the Innovative Climate Cooperation Agreement signed between Switzerland and Ghana would protect nature and ensure sustainable development.

She said Switzerland and Ghana had enjoyed longstanding, good, and close relations over the years and that Ghana since 2002 became a priority country for Switzerland’s economic development cooperation and her two-day visit was successful and a memorable one.

She said her country would continue to support Ghana on its path towards a resilient, self-dependent future.

The Technical Director (Forestry) at the Ministry of Land and Natural Resources, Musah Abu-Juam, said through the Cocoa & Forests Initiative, 226,000 hectares of degraded forests area were restored with thousands of shade trees, whereas 11,000 hectares of cocoa farms were rehabilitated, with about 15 million cocoa hybrid seedlings distributed to farmers.

He said more than 60,000 women and youth received training in Good Agronomic Practices (GAP) and participated in focused projects.

Cacao Made With Love From Finca Dos Vistas – Aripo, Trinidad