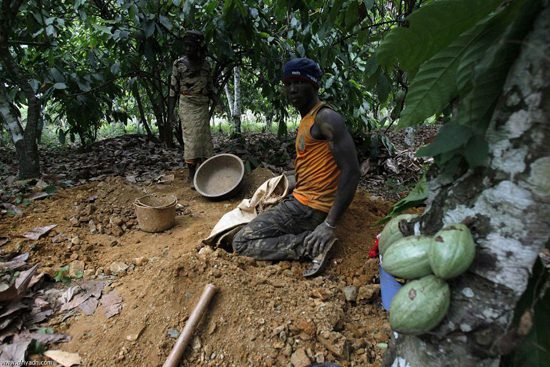 Illegal mining is seriously hurting investments made by the Ghana Cocoa Board in cocoa production across the country.

This is because cocoa farmers who have received various productivity enhancement programmes being implemented by COCOBOD are now cutting down their cocoa trees and giving out their farmlands to illegal miners (galamsey).

Mr. Ebenezer Agyen, Deputy Ashanti Regional Manager of Cocoa Health and Extension Division (CHED) of COCOBOD, who made these known, said there was an urgent need to stop illegal mining activities in cocoa-growing areas to prevent further fall of the country’s cocoa production.

He was speaking at a farmers’ forum organized by the Antoakrom District Office of CHED at Manso-Atwere in the Amansie West District.

The forum, which was under the theme “environmental and social sustainability”, aimed at educating farmers on the various productivity enhancement programmes such as pruning, pollination, irrigation and rehabilitation of diseased and aged cocoa farms, the supply of hybrid seedlings and subsidized fertilizer to the farmers.

In addition, environmental and sustainability issues such as child labour in cocoa farms, gender and women empowerment in the cocoa sector, occupational safety, health, afforestation and environmental conservation, were discussed.

Mr. Agyen warned cocoa farmers against giving out their farms for illegal mining, and said such undertaking would not only deprive them of their lifelong investments, but would also affect the growth and sustainability of the cocoa industry in the country.

He appealed to the Minerals Commission to stop issuing licenses to mining companies to operate on mining concessions located within cocoa growing areas since the practice negatively affected cocoa farms and the cocoa industry at large, water bodies and the environment.

Mr. Agyen also urged the chief Cocoa farmers to collaborate with land owners and traditional authorities to deists from releasing their lands for illegal mining activities.

Mr. Fritz Kwami-Adala, the Antoakrom District Cocoa Officer urged the farmers to put into practice the good agricultural practices introduced to them by CHED and also participate in the various COCOBOD’s intervention programmes to increase their yields and incomes.

Nana Asensu Bonsu, District Chief Farmer and Nana Afia Patakyiaw District Queen Farmer of the Amansie West District, pledged their commitment to educate and cooperate with all cocoa farmers in the area on the need not to voluntarily give out their farms for illegal mining activities.