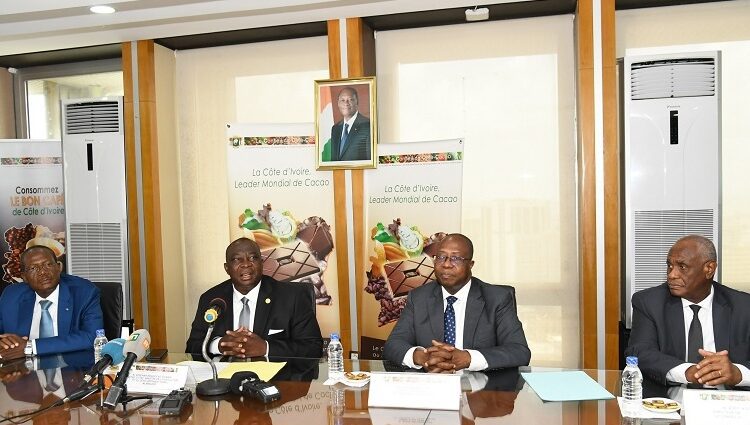 For the intermediate marketing campaign which opens on April 1, the farm gate price per kilogram of cocoa is maintained at 825 FCFA, as in the main campaign.

The announcement was made by the Minister of State, Minister of Agriculture and Rural Development, Kobenan Kouassi Adjoumani, Thursday, March 31, 2022, during a press conference held on the 23rd floor of the Caistab building, in Abidjan Plateau.

This “additional sacrifice” by President Alassane Ouattara is estimated at 60 billion FCFA considering the 12 billion made available to coffee and cocoa producers to curb the difficulties due to the COVID-19 crisis, the minister said.

This amount represents 68% of the CIF price, he added, while noting that President Alassane Ouattara had pledged to pay 60% of the international market price to producers.

Mr. Adjoumani recalled that for the past intermediate campaign, the price was 750 FCA/kg.

The current price is therefore up 10% compared to the price for the 2020-2021 intermediate campaign.

On behalf of the producers, union official Koné Moussa said “big thank you” to the Head of State, promising a day of tribute in his honour.