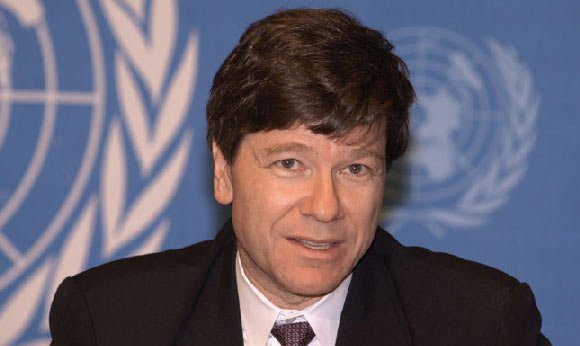 Professor Jeffrey Sachs unveiled his study on 10 July 2019 at the World Coffee Producers Forum in Brazil.

Professor Jeffrey Sachs and the co-authors of his study** proposed the creation of a pre-competitive Global Coffee Fund to finance a public-private partnership to help farmers meet Sustainable Development Goals.

He said historically low prices for green coffee make a joint effort, led by the leading actors in the industry, essential and proposed a fund that would be used to ensure that coffee-growing was sustainable.

He said a huge sum of money – US$10 billion a year – would need to be invested in the fund, with an initial contribution of US$2.5 billion from the industry. Another US$2.5 billion would come from public and private contributions.

The focus of the fund would be social protection for the poorest farmers and support to farmers including access to credit, markets, inputs, science and training to increase productivity and profitability.

The fund would also be used to improve access to basic services in coffee-growing regions, including health and education and to strengthen enforcement of labour laws. It would also provide insurance options to mitigate climate risks.

Responding to the plan, C&CI regular contributor Dr Peter Baker said, “The analysis is quite good, but there are some misconceptions, and it should be made clear that the stats are weak.

“Professor Sachs has Food and Agriculture Organization data for coffee area, but that data is self-reported from countries and is unreliable. They have no incentive to collect the data and tell the truth.

“As ever, Professor Jeffrey Sachs is trying to fix market failure by throwing money at it. US$10 billion a year is a huge sum. I can’t see it happening somehow.”

Industry sources present at the forum told C&CI it was important to bear in mind that Professor Sachs’ presentation was a work in progress. Only the preliminary findings were presented on 10 July and a workshop with some 150 participants took place on 11 July, when the ideas put forward were discussed.

More than 20 different concerns about the proposal were raised. Many of these were about the practical nature of the recommendation, including governance, politics and cost. Those present also identified many things about the report that they liked.

Professor Sachs was in the room during the workshop and was invited on to the stage to reply to some of the critique – which he did to a limited extent – and said he would take the input into account as the report is finalized.

“It’s hard to predict what this means for his core recommendation, but he explicitly said that the concept is modelled on the Global Fund to Fight Aids, Tuberculosis and Malaria, a premise that some questioned, since delivering vaccines and medicines is very different from addressing the many needs of coffee farmers, who range from the quite successful to those who are struggling,” said one source.

Dr Baker said it was also a mistake to think that shade can mitigate a world of 4C warming, as Professor Sachs’ presentation seemed to suggest. “Heavy shade can definitely reduce maxima but only at the cost of reduced yield, so would only trigger area expansion,” he explained. “And it would require substantial irrigation because current and future drought is as big a problem as heat, which would be extremely costly/untenable.”

SPP Global, which represents 500,000 small coffee producers around the world said it believed the solution to the global coffee price crisis is not a fund but sustainable prices.

“We believe that sustainable prices are a better solution for small producers around the world so they are empowered to make the necessary changes and invest in their businesses, in order to increase efficiency and fight climate change,” said SPP Global President, Nelson Camilo Melo Maya.

SPP Global praised Professor Sachs’ analysis of the coffee price crisis and market drivers, but said it felt there is a risk that, if such a fund were to be created, it would be dominated by commercial interests to the detriment of small producers.

Production has consolidated in Brazil and Vietnam

In his presentation at the forum, Professor Sachs highlighted the fact that, since 1995, Brazil and Vietnam have accounted for 83 per cent of the increase in global coffee production. “Other regions have had stagnant productivity, squeezed incomes and low business returns,” he said.

Under continued pressure from low prices and with climate change, a loss in coffee varieties and origins would be expected. There would also be reduced production in Colombia, India, Malaysia, Costa Rica, Madagascar and other countries. Brazil and Vietnam would be expected to increase their market share, with growing risks to global supply chains with most production occurring in just a few countries.

“It is important to remember that most of the world’s coffee is produced by small producers,” said SPP Global. It rejected assertions that there is no future for them if they are not efficient enough to compete with the world’s largest producers. “Small producers can be efficient in their own way and can have a future in coffee,” it said. “To choose what they want to do is a basic human right.”

Miguel Zamora, Director of Market Transformation at Rainforest Alliance told C&CI, “We look forward to reading the full report. The information shared at the forum remained high level and it is not possible to assess how feasible the fund is and how impactful the investments proposed would be.

“That said, we welcome the idea of sharing the responsibility for building a sustainable coffee sector between industry, producers, and governments. The burden of creating a sustainable sector should not fall only on farmers.

“We think it could be a positive development to have a fund that could help farmers fight climate change and make the necessary investments in having the right cultivars, improve sustainable practices, expand access to weather-risk insurance and investments in coffee.

“However, we also believe that we need to create solutions that recognize and reward the improvements that farmers make and that allow farmers to have access to the information/data and tools to make more informed decisions.