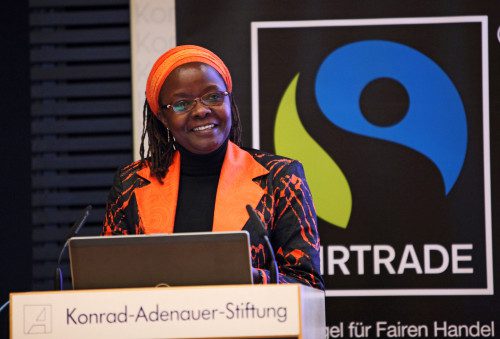 A new Fairtrade study has revealed that the intensifying impacts of climate change pose a serious risk to global agricultural production and directly threaten the livelihoods of millions of Fairtrade farmers around the world.

The study also found that increased investment in climate adaptation and resilience measures are critical if plummeting incomes for Fairtrade farmers are to be prevented.

The report, titled Fairtrade and Climate Change and conducted by researchers from The Vrije University Amsterdam and Bern University of Applied Sciences was released ahead of the 2021 United Nations Climate Change Conference, COP26, which opens in Glasgow Scotland from 31st October.

It paints a bleak picture of the future of some of the world’s most beloved commodities, including bananas, coffee, and cocoa, and explicitly identifies how climate change will impact specific crops and regions in different ways.

The study, which was supported by funding from the European Union, suggests that millions of
farmers could be at risk of financial collapse as their livelihoods come under increasing climate
pressure.

“The threat to the future of many supply chains is very real and our planet’s farmers and agricultural workers are on the frontline of this global climate crisis. We must do everything to ensure they are not left behind and that they are indeed a part of the solution,” she added.

According to the study’s findings, dramatic weather patterns spurred by climate change will
likely deliver severe blows to agricultural production in key regions around the world, from Latin
America to the Asia-Pacific.

Banana producers in the Caribbean and in Central America, for instance, are expected to face less rainfall and more extreme temperatures, while those in Southeast Asia and Oceania will see an increased risk of tropical cyclones.

Meanwhile, in the Dominican Republic and Peru, as well as in parts of West Africa, cocoa farmers are likely to encounter more hot and dry weather periods, while their counterparts in eastern Ghana and northern Côte d’Ivoire may face heavier rains.

Other Fairtrade products are at risk too, according to the study. Sugarcane producers in
Southeast Asia may face increasing drought and heat stress.

Similar conditions could soon afflict tea production in Asia and Africa as well, with producers across Asia and in Malawi and Tanzania predicted to be most severely impacted.

“While impacts vary by crop and location, the report finds that most regions will experience
considerably more extremely hot days,” explained Žiga Malek, Assistant Professor in Land
Use and Ecosystem Dynamics at The Vrije University Amsterdam and lead researcher on
the report.

“In some areas, this will make crop production very difficult or impossible in the near future placing additional stresses on farmers and agricultural workers.”

The impact of climate on agricultural production and the future of food is well-known with
commodities such as coffee having long been in the climate spotlight.

Studies suggest that by 2050, in fact, up to half of the world’s land currently used to farm coffee may not be viable.

However, rarely has the link between climate change and the livelihoods of millions of farmers
and agricultural workers been made in such glaring detail.

Through interviews and a producer’s survey, the study also conducted in-depth analyses of the
perceptions and actions of coffee, tea and spice farmers in India and cocoa farmers in Ghana,
making an important contribution to climate discussions by including the views and priorities of
farmers and how they experience climate change in their communities.

“The way climate change affects the planet is extraordinarily complex. This report offers an
amazing amount of climate data and projections that illustrate the reality of those landscapes
where farmers and workers are producing under Fairtrade terms and the mounting challenges
that they face if the international community continues to fail them,” said Juan Pablo Solís, Fairtrade’s Senior Advisor for Climate and Environment.

Fairtrade has in recent years strengthened its Standards requirements and increased the
programmatic focus on environmental issues and climate change through its Fairtrade Climate
Academies and targeted projects with Fairtrade producers.

Nevertheless, Solís noted that the magnitude of the climate crisis called for “more and wider partnerships to support farmers to jointly face the massive challenges ahead.”

“The international community must rally around farmers and engage head-on in climate action,”
Solís continued. “And this must be done through supporting climate adaptation and resilience
measures to ensure that both farmers’ livelihoods are protected and the environment is
preserved.”

Building off of its findings, the Fairtrade and Climate Change report points to the need for the
international community to financially support farmers in adapting to climate change through
context-specific approaches, ranging from agroforestry and improved shade tree management
to mulching and crop diversification.

However, according to Juan Pablo Solís, adaptation and resilience measures require ‘large
investments’ and burdening farmers and agricultural workers with the costs of such measures is
“yet another injustice they should not have to bear, particularly as agricultural communities of
Fairtrade producers have contributed the least to climate change in the first place.”

Held in Glasgow, Scotland from 31 October to 12 November 2021, COP26 will bring together
global leaders and leading stakeholders to discuss the international community’s climate
ambitions and a pathway to building back sustainably following the ravages of the COVID-19
pandemic.

Fairtrade and the Fair Trade movement will also be on the ground in Glasgow championing the
rights of farmers and agricultural workers through a series of initiatives comprising a global petition demanding climate funding for farmers and a Fairtrade Youth Ambassador campaign to advocacy efforts with global leaders and their delegations.

“The clock is ticking on climate action and the window to achieve a fairer, greener, and more
sustainable tomorrow is rapidly closing,” said Dr. Nyagoy Nyong’o.

“And the voices of those demanding equity are growing louder and more urgent. The time to act is now,” she added.

COP26: Time To Invest in Nature-Based Solutions And Climate-Smart Agriculture