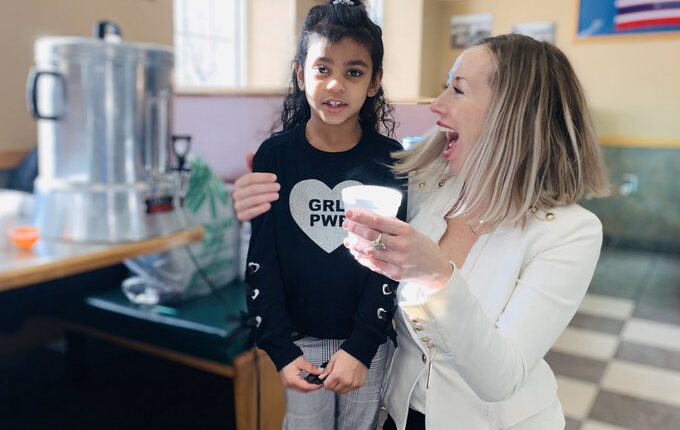 Seven-year-old Santii Patel Spent her day off on Martin Luther King, Jr. Day, fundraising. She charged $1 for a cup of hot cocoa at Bill Gray’s in Greece, for a good reason.

“I’m going to sell hot cocoa to raise money for a swing for kids who have wheelchairs,” Santi said, “So they can have fun and feel the wind in their hair.”

Santi has been working toward raising enough money since last summer, and this is is the third event she’s hosted. The type of swing she’s saving up for would be for children who are in wheelchairs, or in motorized chairs, so they could wheel up a ramp and lock in, then be able to swing.

The idea is for it to be placed in a town park.

Someone who knows a lot about accessibility, and lack thereof, is Stephanie Woodward, with DisabilityDetails.com. She’s been a vocal advocate for those living with disabilities in the Rochester area.

“We have a few wheelchair-using swings around town, but not nearly enough, said Woodward. “Parents of kids with disabilities and kids themselves have to really search out for those swing sets, and they’re far and few between.”

But soon, thanks to Santii, that could change.

“So far she has it set aside in a savings bank so she can get the full amount, so hopefully we can break ground on the swing in the summer,” said Rebecca Jason, Santii’s mom.

Jason explains how this project started.

“She saw a little girl at a sprinkler park and was wondering why she couldn’t play and she said she wanted that girl to feel the wind in her hair,” Jason said.  “I’m very proud of her and I hope she can also help inspire other children.”