3 Ghanaians Among 50 Shortlisted In Cocoa of Excellence 2021 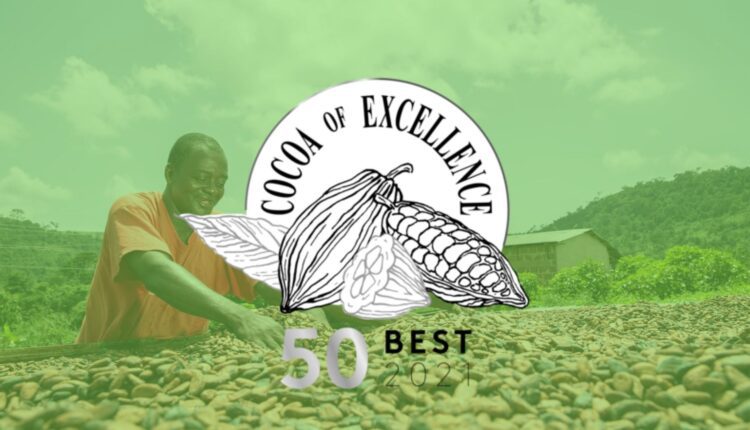 Cocoa of Excellence (CoEx) has announced the 50 finalists shortlisted for the 2021 International Cocoa Awards, where Ghana has repeated its 2019 feat with three spots.

Entries by Seth Yirenkyi and Charlse Oppong, both from Suhum in the Eastern Region, together with that of the Offinso Fine Flavour Cooperative in the Ashanti Region qualified among the 50 best cocoa producers in the world.

The Ghanaian entries were part of 235 cocoa bean samples submitted from 53 cocoa origin countries for the 2021 edition.

Ghanaian Finalists in the 2021 Cocoa of Excellence Best 50 Shortlist

Other cocoa-growing African countries making the shortlist are Ghana’s neighbours Ivory Coast and Togo with 1 and 3 spots respectively; Cameroon 1, Madagascar 3, Tanzania 1 and Uganda 1.

In a statement congratulating the finalists Bioversity International, organisers of the programme acknowledged that “this and last year have been particularly challenging for cocoa producers.”

“The quality of samples increases at each Edition. We appreciate the hard work of all participating producers to produce high quality,” the organisation noted.

To ensure their continuous improvement, Bioversity International intends to send a detailed feedback report to all 235 participants at the end of the Edition.

Ghana’s Samuel Tetteh-Korboe was named among five winners from the Africa and Indian Ocean region, and twenty globally, in the 2019 International Cocoa Awards.

Tetteh-Korboe was one of three finalists from Ghana, with the other two being Augustine Blay and Joseph Jongmaatey.

The world winners were celebrated at the Salon du Chocolat in Paris, France, shining the international spotlight on the work of cocoa farmers, and the diversity of cocoa around the world.

The organisers say cocoa diversity is vital for production, as it provides different flavours, resistance to pests and diseases, and resilience in climate changes.

They explained that providing incentives for safeguarding cocoa diversity to farmers and national organizations ensures a portfolio of options remain available for the future.