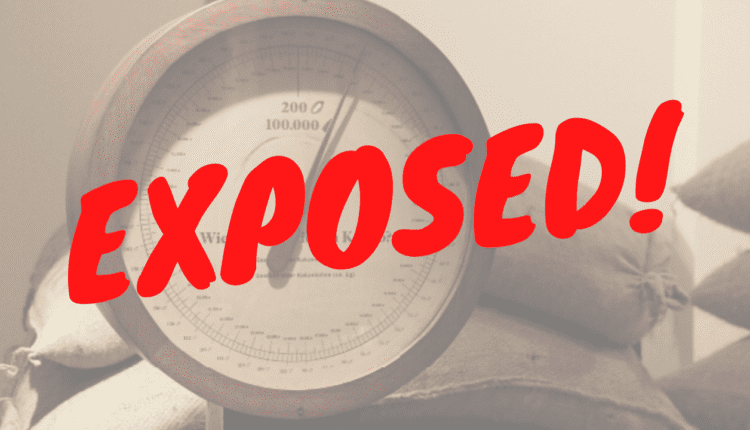 An investigative documentary by JoyNews, an Accra based media house, has exposed a systematic scheme by some purchasing clerks of cocoa buying companies that rob cocoa farmers of their sweat.

The documentary titled, Missing Kilos, reveals how cocoa buyers dishonestly adjust their weighing scales to steal as much as 100 kilogrammes of cocoa beans per farmer.

Although the industry regulator, Ghana Cocoa Board’s official weight for a bag of cocoa is 64kg the cocoa buyers blatantly disregarded that, operating by their own rules to the detriment of poor farmers.

Meanwhile, the Communications Manager of COCOBOD, Mr Fiifi Boafo, has commended the investigative team for exposing the “ill in our society and industry”, assuring that steps have since been taken to curtail the practice.

“Beginning the next cocoa season (October 2020), we will be introducing electronic weighing scales. We have gone past the stage where it’s in their hands to decide whether or not to adjust the scale by 3 or 5 kilos”, stated Mr Boafo.

The documentary filmed in 2018 was bugged by a legal tussle for two years after the local cocoa buyers association secured a court injunction halting publication.

Missing Kilos is said to detail how officials of some state and privately-owned cocoa trading firms adjust weighing scales to cheat cocoa farmers, stealing much as 100 kilogrammes of cocoa beans from a single farmer.

The cocoa traders association is reported to have argued to the courts that the “airing of the documentary will cause them irreparable damage.”

The three-member panel presided over by Dennis Adjei ruled the association’s demand “unmeritorious”.

This is the second time the Multimedia Group is receiving a court clearance to broadcast the investigative documentary.

In May 2018, an Accra High Court gave the media giant the green light to air the documentary produced by journalist Kwetey Nartey.

But lawyers for the Association appeal the Court’s decision. And also went as far as the Apex court of Ghana with another application to quash the High Court ruling over lack of jurisdiction, but failed.

Attorney for the media firm, Roselyne Kaledzi, told the court to that the said the findings of the documentary are of national interest and should not be blocked.

The court then moved to dismiss the Association’s injunction and awarded a cost of ¢2,000 against them.

In February this year, Ghana’s cocoa regulator – COCOBOD – directed all licensed buying companies (LBCs) to use electronic weighing scales in the purchase of cocoa beans effective in October.

The policy move was to help clear wanton allegations and suspicions of cheating perpetrated by cocoa purchasing companies, particularly purchasing clerks, who are said to adjust analogue weighing scales to cheat cocoa farmers.

Speaking at a national stakeholder dialogue on cocoa farm gate pricing and income of cocoa farmers in Accra, a deputy Chief Executive of Ghana Cocoa Board, Dr Emmanuel Opoku, said the electronic weighing scales would be procured by the LBCs, adding that the board was taking every necessary step to protect the interest of cocoa farmers.

WATCH Part One of “Missing Kilos” BELOW

COCOBOD’s Electronic Scales To End Tampering Not Ready Until 2021