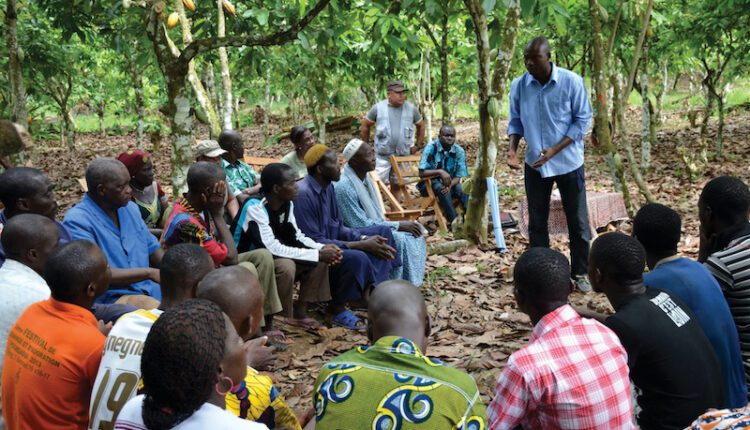 These were among the significant milestones for the scheme which was set in motion back in 2017 between the two governments of the West African nations, and major businesses within the sector.

The scheme was also signed by the World Cocoa Foundation, IDH, the Sustainable Trade Initiative, and aims to create business-driven solutions to the crucial environmental issue of reviving forests in Ghana and Ivory Coast, which are critical to the sector’s viability.

Consequently, in 2018-2019, CFI signatory companies and the governments of Côte d’Ivoire and Ghana began implementing activities that will help meet their 2017 joint commitment to end cocoa-related deforestation and forest degradation. This has included a landmark agreement that has resulted in a million farms within the scheme being mapped, further enhancing traceability within the cocoa supply chain.

Governments’ efforts have focused on creating policy, legal and institutional frameworks that can support the implementation of CFI signatories’ programs. This included the release of a new Forest Code in Côte d’Ivoire, strengthened collaboration on a landscape level in CFI priority areas in Ghana, and taking measures to actively promote agroforestry in both countries. The Governments have also released forest boundary maps and updated land cover maps to help signatory companies identify areas that are at risk of deforestation.

CFI is a joint partnership of the governments of Côte d’Ivoire and Ghana, and 35 cocoa and chocolate companies facilitated by IDH, the Sustainable Trade Initiative and the World Cocoa Foundation (WCF), with support from the Dutch Ministry of Foreign Affairs (BUZA), Partnership for Forests (P4F) through the United Kingdom Government’s Department for International Development, the US Agency for International Development (USAID), and the World Bank.

The latest Progress Reports contain data and testimonials from companies, government officials, civil society leaders and farmers that have been working together, since March 2017, to end deforestation and forest degradation in the cocoa supply chain.

Kwaku Asomah-Cheremeh, Minister of Lands and Natural Resources in Ghana said: “We are proud to present the CFI achievements so far, and in particular, progress achieved in terms of promotion of climate-smart cocoa, clarification of tree tenure, and facilitation of landscape-level partnerships. Moving forward, we need to continue working together to mobilise sustainable funding to make further progress with our commitments, especially in key areas of satellite-based monitoring and forest categorisation.”

Furthermore, Alain-Richard Donwahi, Minister of Water and Forests in Côte d’Ivoire note that  since the signature of the CFI commitment, there had been significant progress on the protection of forests, including through the release of the new Forest Code in 2019.

He said: “This new code defines the legal and regulatory framework for the implementation of the CFI, including the creation of a differentiated approach to classified forests, which also takes into account the needs of communities whose livelihoods depend on forests. The next challenge will be for us to mobilise further funds to support implementation of this ambitious policy, in close collaboration with the private sector, and with support from civil society organisations.”

World Cocoa Foundation President Richard Scobey said: “We are proud of CFI’s first steps and are determined to keep our eyes on the prize: end deforestation and restore forest areas. In 2020, we will notably accelerate private sector collaboration across cocoa landscapes and, in partnership with governments, put in place effective tools to monitor and eliminate any new deforestation.”

Jonas Mva Mva, Programme Director Cocoa, IDH added that it has huge appreciation for the commitment between the governments and the private sector to work together to address deforestation in the cocoa supply chain.

He said: “Important progress was achieved in 2019, and more needs to be done to accelerate implementation of ambitious forest protection and restoration programs, and to put in place a simple, but efficient system to systematically monitor progress towards CFI commitments in 2020.”

Protecting Forests As An Economic Proposition For Cocoa Farmers