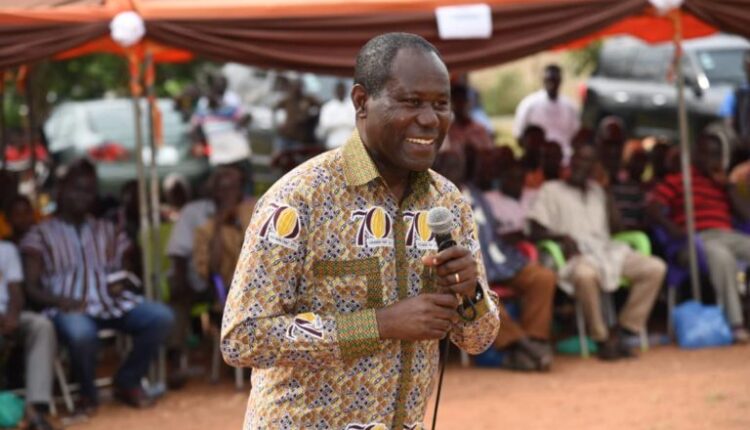 The scholarship scheme, widely known as COCOBOD scholarship, have for the past half a century sponsored the tuition, examination, boarding and feeding fees for the wards of cocoa farmers at the senior high school level.

But the government of Ghana has since 2017 introduced the Free SHS education policy which absorbed all the fees COCOBOD, hitherto, paid for under the Farmers Scholarship scheme.

Chief Executive of Ghana Cocoa Board, Mr. Joseph Boahen Aidoo noted, “due to the free SHS introduced by the government, we want to channel that fund into improving school infrastructure in areas where the children walk several kilometres before they can access education facilities.”

Mr. Aidoo was addressing a cocoa farmers’ rally at Kokobeng in the Akim Swedru District, as part of a 3-day working tour of some cocoa-growing communities in the Eastern Region.

The proposal, Mr. Aidoo, pointed had been tabled before the Board of Directors of COCOBOD for consideration.

The proposal was first hinted, last year, by the chairman of the Parliamentary Select Committee on Food, Agriculture and Cocoa Affairs, Mr. Kwame Asafu-Adjei, stating the scholarship scheme would be phased out by June 2019 when the last batch of the fee-paying students had completed school.

With the first batch of the free SHS students now in the final year, the fund for the scholarship has been rendered redundant.

Mr. Aidoo said, if approval was given by the board, his outfit would immediately begin the development and improvement of infrastructure to address challenges associated with schools in dilapidated buildings and unavailability of school structures in some cocoa communities.

“In Cocobod, our scholarship is awarded to children going to the senior high school, but the government has made it free and that is why we want to invest in infrastructure after our research showed that some of the children walked over 3 kilometres before they could access educational facilities,” he explained.

Mr. Aidoo is convinced investing in infrastructure would increase the number of farming families and communities benefiting from funds allocated for the purposes of the Farmers Scholarship Trust.

“We will invest in kindergarten, primary and junior high schools so that more structures will be constructed,” he added.

Records indicate that an average of 7,500 wards of cocoa farmers benefited from the COCOBOD scholarship annually to pursue second-cycle education.