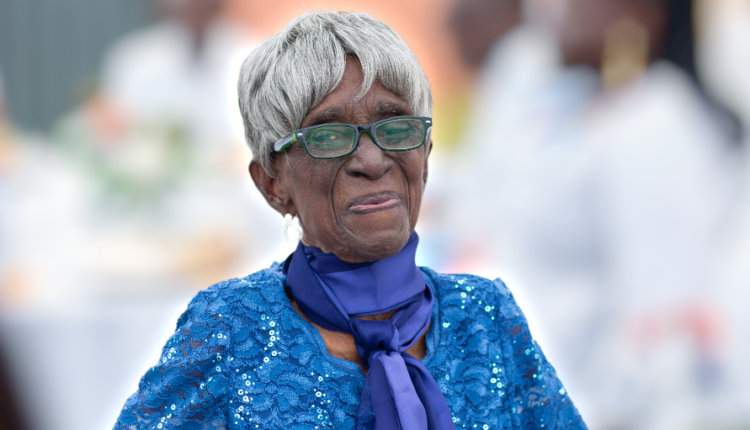 Reacting to the award, the centenarian crop scientist expressed profuse appreciation to all her former colleagues at the Cocoa Research Institute of Ghana (CRIG), an organisation she headed as the first female and longest-serving Executive Director.

“I will say all the people within my Division of Plant Breeding at Tafo, all the labourers who have helped to keep the place up,” adding, “everybody was kind to me.”

She recalled, “I had left a teaching career to go to this research institute and at first, I was frightened. But I was surprised everybody was friendly and I thank them for it.”

She looked back at her contribution to CRIG with pride, particularly encouraging many female scientists to join Africa’s elite cocoa research organisation.

“When I first went there, there was just European staff and a few Africans. When I left there were several Africans [and] several women.

There weren’t many women there when I went there. I was the only Ghanaian woman. But as time went on, I think the way they cooperated encouraged other women to join us,” Dr VA Martinson recounted.

Born September 20th 1922, Dr. VA Martinson is one of Ghana’s astute female Research Scientists whose contribution towards the development of cocoa and coffee is unparalleled.

The iconic trailblazer’s footprints date back to the early 1970s when she championed several research projects at the Cocoa Research Institute of Ghana (CRIG).

Her mastery in her field of study was aptly evidenced in how she effectively combined diploid Robusta with Tetraploid Arabica coffee varieties to produce Arabusta Coffee hybrids.

Her research into the cytology and fertility of tetraploid cocoa from interspecific crosses significantly improved the crop’s resistance and tolerance to the Cocoa Swollen Shoot Virus Disease (CSSVD).

This accolade, among other distinguished accomplishments she has to her credit provided baseline motivation for further developments into pollination science and the genetic basis of improvement of tree crops.

Dr. VA Martinson completed her basic school education at the Accra Government Girls’ School. She attended Achimota College and proceeded from there to St. Monica’s School, Ashanti Mampong as a Tutor.

She gained a government scholarship to further her schooling at the University of Durham, United Kingdom, where she studied Botany and gained a B.Sc degree.

Dr Martinson returned to St. Monica’s School to teach Science before being reposted to the West African Cocoa Research Institute(WACRI), now renamed CRIG, as a Research Scientist at the Plant Breeding Division.

Having published several of her research works in reputable international journals, the quality of her work earned Ghana a niche, being touted as the lead centre of excellence for research into beverage crops, globally.

Apart from being the longest-serving Executive Director of CRIG (1979-1990), Dr. VA Martinson still remains the first and only female, who through dint of hard work, perseverance, dexterity, and discipline, rose to such an enviable position in the annals of CRIG.

While at CRIG, she was not only passionate about her profession, but also, she paid attention to the development of a robust workforce.

This passion was motivated by her quest to ensure that the reputable image of the institute remained unbroken through a dedicated and formidable human resource capital.

The CRIG Cocoa Clinic was just one of the several ways she demonstrated her in-depth concern for the welfare of staff and their dependents.

It is in recognition of her humane attributes and exemplary leadership style that today that clinic has been named after her – the VAM Clinic.

She exuded excellence, passion, innovation, and resilience, and tried to rally all who worked with her to imbibe such values.

In this regard, she became a mentor to many scientists who equally held on to these values and made them part of the principles of the Institute.

Mr Kojo Hayford, the Executive Director of Cocoa Post, the organisers of the Ghana Cocoa Awards, said the organisation is proud to celebrate the accomplishments of Dr Veronica Agartha Martinson by presenting her with the Lifetime Achievement Award at the fourth annual Ghana Cocoa Dinner.

He emphasised that exemplary personalities like Dr Martinson ought to be spotlighted and celebrated at the highest levels to serve as motivation and encouragement to the younger generation.

Farmer Points Good Prices As The Engine Of Cocoa Sustainability