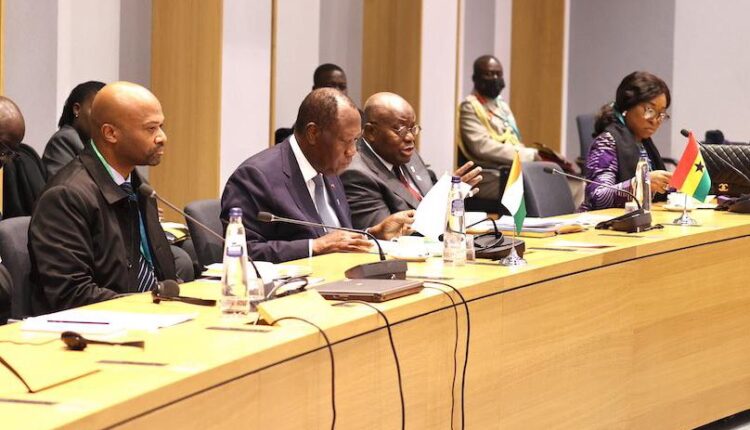 The President of Ghana, Nana Akufo-Addo, and his Ivorian counterpart, Alhasanne Outtara, have challenged the European Union to prioritise the livelihood and incomes of cocoa farmers as it mulls over its cocoa sector due diligence legislation.

They contend that current cocoa production bottlenecks are significantly impacted by woefully low cocoa prices on the international commodities market.

The two leaders reaffirmed their position during the 2022 European Union – Africa Union Summit in Brussels.

The European Union is determined to introduce the sweeping legislation it deems crucial to tackle the issue of deforestation and human rights in cocoa-producing countries.

The proposed law, widely backed by environmental groups and some chocolate companies, is said to introduce “a general obligation on companies to conduct human rights and environmental due diligence across their entire operations and supply chains.”

The coalition of actors supporting the EU’s legislative initiative is “confident that such legislation has the potential to benefit producer countries by reinforcing their efforts to establish a sustainable cocoa sector for the long term.”

The Executive Secretary of the Côte d’Ivoire – Ghana Cocoa Initiative (CIGCI), Alex Assanvo,  who attended the EU-AU Summit alongside the two presidents, insisted in a tweet that “the price obtained by producers is the key variable in the sustainability equation.”

The European Union is the largest buyer of cocoa from the West African block. Concerns are that the promulgation of the law will gravely affect the sale and export of cocoa into the European Union.

Africa’s cocoa growers have historically suffered indecent international prices for their produce with experts linking the status quo to the ills of the sector.

In an effort to correct the colonial cocoa pricing mechanism Ghana and Côte d’Ivoire, the world’s leading cocoa producer nations, forged a pact in 2019, which last year resulted in the formation of the Côte d’Ivoire – Ghana Cocoa Initiative (CIGCI).

Prior to the formation of the Initiative, the two cocoa production giants had in 2019 secured an extra $400 per tonne on the price of their cocoa.

The amount, known as the Living Income Differential, is aimed at helping alleviate endemic poverty among millions of smallholder cocoa farmers in Ghana and Côte d’Ivoire.

Below is a statement issued by the Côte d’Ivoire – Ghana Cocoa Initiative:

Today, February 18, 2022, the Heads of State of Ghana and Côte d’Ivoire met with the President of the European Parliament and expressed their concerns about the risk of increasing poverty among cocoa farmers in both countries if the current proposed Deforestation legislation is adopted as it is without considering the adverse impact it will have on the income of the many smallholder farmers.

The two Heads of State reiterate their commitment to sustainability and improving the living conditions of cocoa farmers:

– Recognize that the worst forms of child labour and deforestation are linked to the living conditions of cocoa farmers, and strive to address the challenges that will help to overcome the root causes of this situation;

– Commit to ensuring the safety of their children and to continuing their efforts to combat the worst forms of child labour in accordance with International Labor Organization (ILO) Convention 182;

– Commit themselves to protect the environment by fighting deforestation and investing in the restoration of forests loss to cocoa production;

– Request that the producer’s income and therefore the price of cocoa be considered as the determining factor of sustainability. Thus, the two Heads of State invite the European Union, consumers and the various actors of the cocoa sector to strengthen and consolidate the Living Income Differential (LID) mechanism jointly initiated by our two countries and welcomed by the industry.

– To this end, the two Heads of State today call on the European Union to join them in agreeing on an Economic Pact for Sustainable Cocoa in order to balance the three pillars of sustainable development (Economic – Social and Environmental).

– The two Heads of State welcome the prospects of a partnership with the European Union, for a sustainable cocoa value chain and to avoid poverty being associated with cocoa farming in an already volatile security environment in the sub-region.

Chocolatarium 2022 To Highlight Business Of Chocolate In Ghana