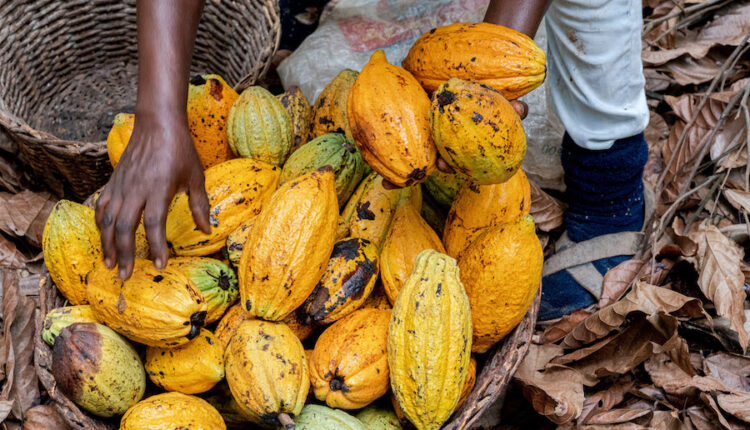 Ghana has increased its cocoa producer price from GHS660 to GHS800 per bag for its 2022/23 crop, said Dr Owusu Afriyie Akoto, the Minister of Food and Agriculture in Accra, on Wednesday.

Ghana Cocoa Board thus will be buying a tonne of the key chocolate ingredient from farmers at GHS12,800 per tonne representing 89.99% of the net FOB value.

The announcement comes after Ghana’s neighbour Ivory Coast raised its cocoa producer price by 9% from 825CFA to 900CFA ($1.33) per kilogram last Friday, 30 September 2022.

Ghana’s cocoa sector regulator Cocobod earlier said its data indicated a 34 per cent slump in output for the first six months of the 2021/22 season compared to the same period the previous year.

According to the Board, a double whammy of drought and illegal gold mining has forced it to revise downward its 850,000MT production target for the year to 650,000MT, with an estimated loss of $350 million in revenue projections.

More than 19,000 hectares of vibrant cocoa farms are confirmed to have been destroyed by illegal gold mining (galamsey) activities, which is feared to worsen as cocoa farmers frustrated by low prices sell out farmlands.

A prevailing economic crisis in the West African country coupled with fertilizer shortages caused by the Russian-Ukraine war is predicted to negatively impact the crop output 2022/23 season.

Meanwhile, ahead of the announcement a cross-section of Ghanaian cocoa farmers put up a spirited demand for better prices citing the high cost of living, input price hikes and the depreciation of the local currency – the Ghana Cedi.

The Ghana Civil-society Cocoa Platform (GCCP) backed the calls with a proposal for a minimum GHS838 producer price for the 2022/23 harvest.

On the other hand, cocoa authorities in Cote d’Ivoire and Ghana have in recent times had to contend with heavy discounting of their origin premiums into negatives, completely erasing the effect of the $400 LID designed to tackle extreme poverty among cocoa farmers.

A joint body spearheading the interests of the two countries in the cocoa industry, Cote d’Ivoire – Ghana Cocoa Initiative (CIGCI), in May took a drastic step to publish origin differentials paid by buyers of their cocoa.

In a follow-up action in July, CIGCI and the cocoa regulatory authorities in both countries summoned buyers and chocolate companies to Accra, where they raised the issue for settlement.

The top two cocoa-producing nations in the world have since resolved to only sell their cocoa with positive country differentials, a market premium earned for the quality of produce.

Ghana’s regulator Cocobod revealed in July that it has been accumulating $400-million per annum debt in order to maintain farmgate prices at acceptable levels, as premiums are completely eroded and world market prices tumble.