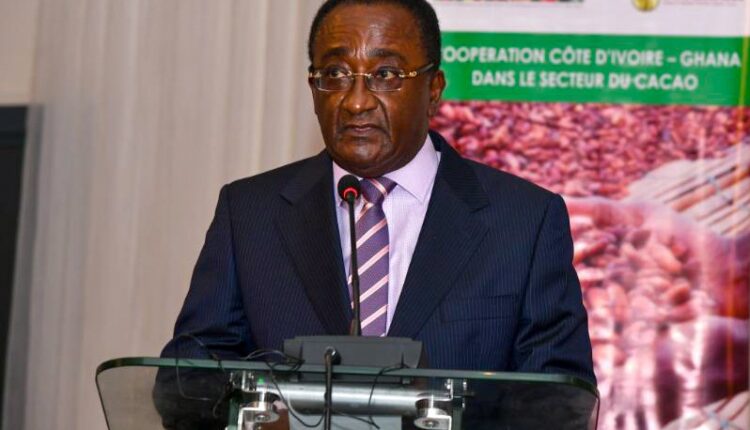 Ghana’s Minister for Food and Agriculture, Dr Owusu Afriyie Akoto, has been elected the first Chairman of the Steering Committee of the Cote d’Ivoire-Ghana Cocoa Initiative (ICCIG).

The Steering committee headed by Ghana’s Food and Agriculture Minister serves as an advisory body made up of top-level stakeholders and would be expected to provide guidance on critical issues by the executive body.

Earlier this year, Ivory Coast’s Alex Arnaud Assanvo was appointed to be the first-ever Executive Secretary of the Initiative Cacao Côte d’Ivoire-Ghana (ICCIG), headquartered in Accra.

Mr Assanvo, the former Director of Corporate Affairs for Europe and Africa at Mars Inc, coordinates efforts by the two cocoa superpowers to promote and defend their collective position in the global market.

Ivory Coast and Ghana, the two neighbouring West African nations jointly account for about 70% of the world’s cocoa output.

The bilateral cooperation on cocoa which commenced in 2017, between presidents of the two countries, led to the introduction of the $400-per-tonne Living Income Differential (LID) in 2019 to tackle extreme cocoa farmer poverty.

Last August, Ghana and Ivory Coast further deepened the successful cooperation by the establishment of the Initiative Cacao Côte d’Ivoire – Ghana (ICCIG) an organisation to harmonise their efforts as they try to take their rightful place of influence as leaders in global cocoa beans supply, particularly in the interest of the millions of their cocoa farmers languishing in abject poverty due to unfavourable world market prices for their produce – the key ingredient in chocolate.

Last month, Accra host a midterm review meeting to assess the implementation of the Living Income Differential, a key achievement of the Cote d’Ivoire – Ghana cooperation on cocoa.

Other issues discussed at the day’s meeting included the uncoordinated farmgate or producer price of cocoa in the two neighbouring West African countries and its implications on the LID.

COCOBOD and CCC, the implementing agencies for the Côte d’Ivoire-Ghana Initiative on Cocoa, are said to have reviewed activities of the body, referred to as the OPEC of the cocoa industry.

Effective 1 October 2020, Ghana Cocoa Board (COCOBOD) began the purchase of cocoa beans from farmers with the US$400 Living Income Differential (LID) added to their payments.

The successful addition of the LID raised the farmgate price of cocoa by a historic 28% in Ghana to GHS660, occasioning applause by farmers and Cocoa CSOs to the government who welcomed the move.

To ensure further commitment to maintaining the direct payment of all proceeds of the US$400 LID directly to cocoa farmers in the two countries have sealed it by legislation in both countries.