11-member Board of Trustees inaugurated 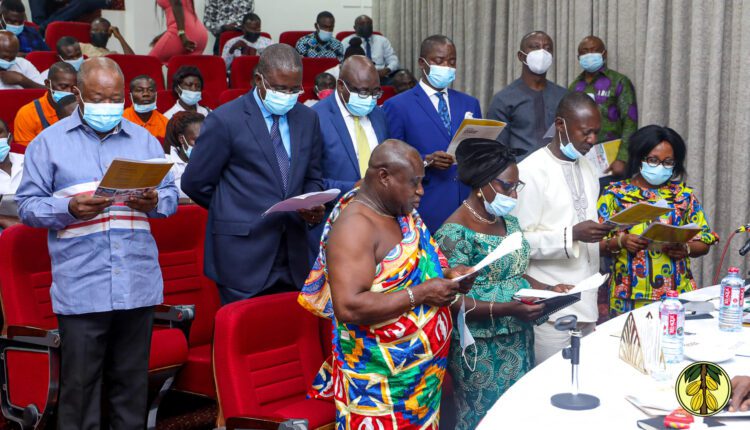 The long-awaited welfare intervention for the Ghanaian cocoa growers took off, Wednesday, with the inauguration of an 11-member Board of Trustees to manage the novel welfare and Pension Scheme.

The scheme, a product of the 37-year old Ghana Cocoa Board law, is aimed at ensuring a decent pension for all Ghanaian cocoa farmers, improving their welfare as well as making cocoa farming attractive to the youth.

“This gesture must be seen as an indication of the unflinching commitment of President Nana Akufo-Addo’s drive to providing guaranteed income for the Ghanaian cocoa farmer in an effort to motivate the youth especially, to sign on to cocoa farming as a business,” Ray Ankrah, Deputy Chief Executive for Finance & Administration of Ghana Cocoa Board, maintained.

He said the Board is focused on creating decent jobs for the teeming populace through innovative policies and programmes, such as the investment into the Cocoa Farmers Pension Scheme.

“We have made a commitment to pay 1% of every cocoa sold by registered farmers into the scheme. I wish to indicate that this 1% will be done regularly. This is the covenant with cocoa farmers and it’s going to happen. We will ensure that the funds are available to be transferred into the contributors’ accounts without any hitch,” the Deputy Chief Executive assured.

According to him, management is committed through its policies and programmes to changing the narrative about cocoa farming, making it lucrative for farmers and actors within the value chain.

“It is, therefore, our fervent hope to consolidate all these gains achieved over the past 5years under the leadership of President Akufo-Addo and even to work harder to create a viable cocoa economy that will continually support the government’s trajectory into job creation and wealth creation,” Ray Ankrah added.

He said the decision to operationalise the Cocoa Farmers Pension Scheme, as enshrined in the COCOBOD Law (PNDC Law 81) signalled the government’s commitment to improving the living conditions of cocoa farmers, especially in their retirement.

The platform is expected to serve as the spine for such programmes and welfare interventions as the Cocoa Farmers Pensions Scheme.

About 500,000 cocoa farmers have, so far, been captured onto the Cocoa Management System, according to the regulator.

Dr Emmanuel Opoku appealed to cocoa farmers to “avail themselves to obtain the cocoa cards to enable them to register with the scheme and enjoy all the benefits that go with it.”

The National President of the Cocoa Coffee and Sheanut Farmers Association (COCOSHE), Alhaji Alhassan Bukari, commended Cocobod and the government for the bold decision to operationalise the pension scheme.

He urged Cocobod to step up its farmer education campaign on the importance of the CMS and the pension scheme in order to have all cocoa farmers enrolled.

Inaugurating the Board of Trustees, the Minister of Employment and Labour Relations, Ignatius Baffour Awauah, cautioned against interference in the work of the independent Board of Trustees.

The 11-member Board which is chaired by an experienced actuary, Daniel Aidoo Mensah, has members including David Appiah Ofori, also an actuary; Samuel Danquah Arkhurst, economist; Peter Osei-Amoako, chartered accountant; and Vincent Okyere Akomeah, economist and the Managing Director of Cocoa Marketing Company.

The Cocoa Farmers Pension Scheme was formulated under the Ghana Cocoa Board Law (PNDC Law 81) in 1984 as a welfare intervention to ensure decent pensions for farmers after retiring from active cocoa farming.

The scheme’s sponsor, Cocobod, in August this year undertook a pilot registration exercise at New Edubiase in the Ashanti Region where some 2800 volunteer cocoa farmers were successfully captured under the scheme.

For now, only a person registered as a cocoa farmer with a Cocoa Card issued by Cocobod through the Cocoa Management System is eligible for enrolment onto the Cocoa Farmers Pension Scheme.

Registered farmers are required to make a mandatory contribution of 5% of their produce sold, which will be deducted at the point of sale, while Cocobod pays a minimum of top-up of 1% on behalf of the farmer.

25% of the farmer’s total contributions will be credited to a Personal Savings Account and the 75% remaining credited to the Retirement Account.

According to Cocobod, there is no age limit for enrolling on the Cocoa Farmers Pension Scheme. However, a contributor may be eligible to access pensions after contributing for 5years.