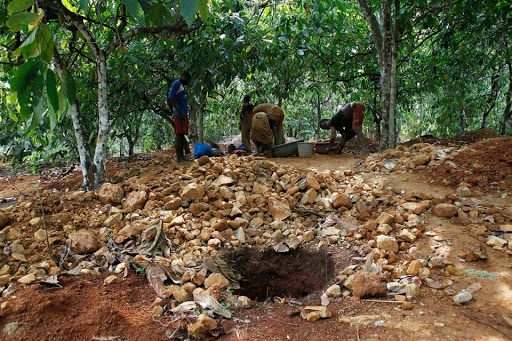 Some lead cocoa farmers and opinion leaders from Asunafo-Abomosu, a cocoa farming community in the Atiwa West District of the Eastern Region have petitioned the Chief Executive of Ghana Cocoa Board (COCOBOD), Mr Joseph Boahen Aidoo, to assist in clamping down the upsurge in the activities of illegal miners in cocoa growing communities of the region.

The team, led by the Eastern Regional Chief Farmer, Nana Obeng Akrofi, was at Cocoa House to confer with the Board to find lasting solutions to the galamsey menace which is threatening cocoa farming in the region.

Speaking on behalf of the farmers, Mr. Seth Oppong described Asunafo-Abomosu as the leading cocoa producing community in the Eastern region adding that the area had consistently recorded over 20,000 bags of cocoa annually.

Mr Oppong, however lamented that the activities of illegal miners had affected water bodies and farms, and feared farmers’ incomes would be badly affected if the menace was not curbed.

He mentioned that the high prevalence of social vices such as ritual killings, armed robbery, teenage pregnancies alongside environmental degradation would render the hard work and toil of residents, especially cocoa farmers fruitless if these issues were not addressed.

He noted again that Asunafo is low-lying making it environs susceptible to flooding during the rainy seasons. He indicated that illegal mining with it attendant, uncovered pits and gallies would only aggravate flooding with far reaching repercussions and appealed to government through COCOBOD to come to their aid to eradicate galamsey and related activities that are inimical to cocoa farming in the region.

While commending COCOBOD for the on-going cocoa farms rehabilitation exercise in the region, fertilizer distribution programme and other productivity initiatives, Mr Oppong was of the view that the gains in these cocoa sustainability and livelihood empowerment strategies would be badly undermined by illegal mining activities in the region and entreated the Board to collaborate with the Lands, Minerals and Forestry Commissions to urgently step up efforts at combating illegal mining to avert lossing the huge financial and material investments put in these programmes.

Narrating further, Mr Oppong hinted that one RASTA and a company named ATK Mining Company were behind a juicy scheme which entices gullible landowners in exchange for their lands for illigal mining.

According to him, several petitions to the District Assembly and District Police command have all fallen on deaf ears.

He also alleged that some operatives from the National Security from the Office of the President are also believed to be inciting residents against each other, causing divisions and strife in the communities.

Receiving the petition on behalf of COCOBOD, the Senior Public Affairs Manager, Mr Stephen Boafo commended the farmers for their dedicated service to the cocoa sector as well as their decision to use-non violent means to resolve the threat posed to their farms by galamsey operators.

Mr Boafo reiterated the Board’s commitment at ensuring environmental sustainability within the cocoa value chain and expressed optimism that action would be taken on their petition to save cocoa farms and livelihoods of farmers.

He used the opportunity to call on the farmers to support the Board in its fertilizer distribution programme in the district and the on-going rehabilitation of diseased and aged farms.

He again assured that COCOBOD would work tirelessly with the relevant authorities to develop policies that would regulate the activities of illegal miners in Ghana for a sustainable environment to boost economic activities.

Meanwhile, the residents of Asunafo-Abomosu have threatened to use other aggressive means to deal with illigal miners if relevant bodies do not act quickly to address their rampant and destructive activities in the region.