How Much Cocoa Farmers Earn And Why We Need To Announce “A Cocoa Emergency!”

“To set the context right, the Cocoa-Chocolate industry is worth US$131bn yet when you break it down, the smallholder cocoa farmers who own est. 4,500,000 cocoa farms in the world with over 36,000,000 dependents are given only 6% to 6.6% of the industry’s ever-growing annual worth/value to share, whereas the rest goes to cocoa processors, chocolate manufacturers and their marketers who are all predominately in the west.”

The income of cocoa farmers has been a topical issue among the key actors within the cocoa industry due to its consequence for the sustainability of the entire value chain.

We define “Low Income” as income less than the international poverty line of US$1.90. Particularly in Ghana, low income among cocoa farmers is a big concern because these farmers depend on cocoa for 90% of their primary source of income.

In my previous article, we talked about how cocoa farmers are patronised by Fairtrade for the benefit of everyone other than the cocoa farmer with an initial promise of ensuring that farmers gained high incomes to sustain their livelihoods.

So, in this article, we will discuss how much the cocoa farmer earns in Ghana and the consequences of their level of income.

How much income does a Ghanaian Cocoa Farmer generate in the sector?

So, in Ghana, Cocoa farmers unlike orange farmers, don’t determine the price for their sweat. Regardless of the negative effects of external environmental factors like increased cost of inputs, drought, floods, etc., the farmer still has to endure by relying on the price fixed for them by the sector regulator.

Farmers only have to pray and hope that they receive some increment in price the next year.

In Ghana, COCOBOD through its Producer Price Review Committee fixes the price of the commodity and is also the only legal buyer of cocoa beans through Licensed Buying Companies (LBCs) and trades to customers all over the world.

This means the farmer can’t sell his/her own product even if he/she establishes a cocoa processing plant and needs it as an input.

The Ghanaian cocoa farmers receive on average 70% of the price at which the cocoa beans are sold by the state-owned Cocoa Marketing Company to buyers.

The remaining 30% goes to paying LBCs, transporters of the beans from the farmer’s farm to warehouses, etc.

Also, because this price is set at the beginning of the season, it starts to lose its economic value due to inflation which happens throughout the year, hence affecting the actual disposable income of the farmer.

So, the farmer loses 30% on price and inflation further depletes the remaining.

In relation to the income generated, the international labour Right Forum highlighted that the average net earnings for cultivating a two-hector cocoa farm in Ghana were estimated at US$2.69 per day.

Even though this net earnings of $2.69 may be seen as above the international poverty line of US$1.9, each cocoa farmer is estimated to have an eight (8) member-household, hence individual household members live on $0.33 a day.

I guess the cliché and ignorant responses people give are:  why do they have such huge family sizes? Why don’t they reduce their family size? In fact, why should they marry to even make babies, when living alone would be living above the poverty line?

Interesting. Cocoa Farmers do have large family sizes because they rely on them as non-paid labour to supplement the extra labour they require so that they can reduce some of the labour related costs to be able to foot the cost of production.

The western world who claim to hold human rights in high esteem expects all these labour regulations to be existing in the cocoa farms in poor countries, yet it allocates only 6% of the industry’s value to the 6,000,000 cocoa farmers to share.

Does land ownership affect the little income they generate? 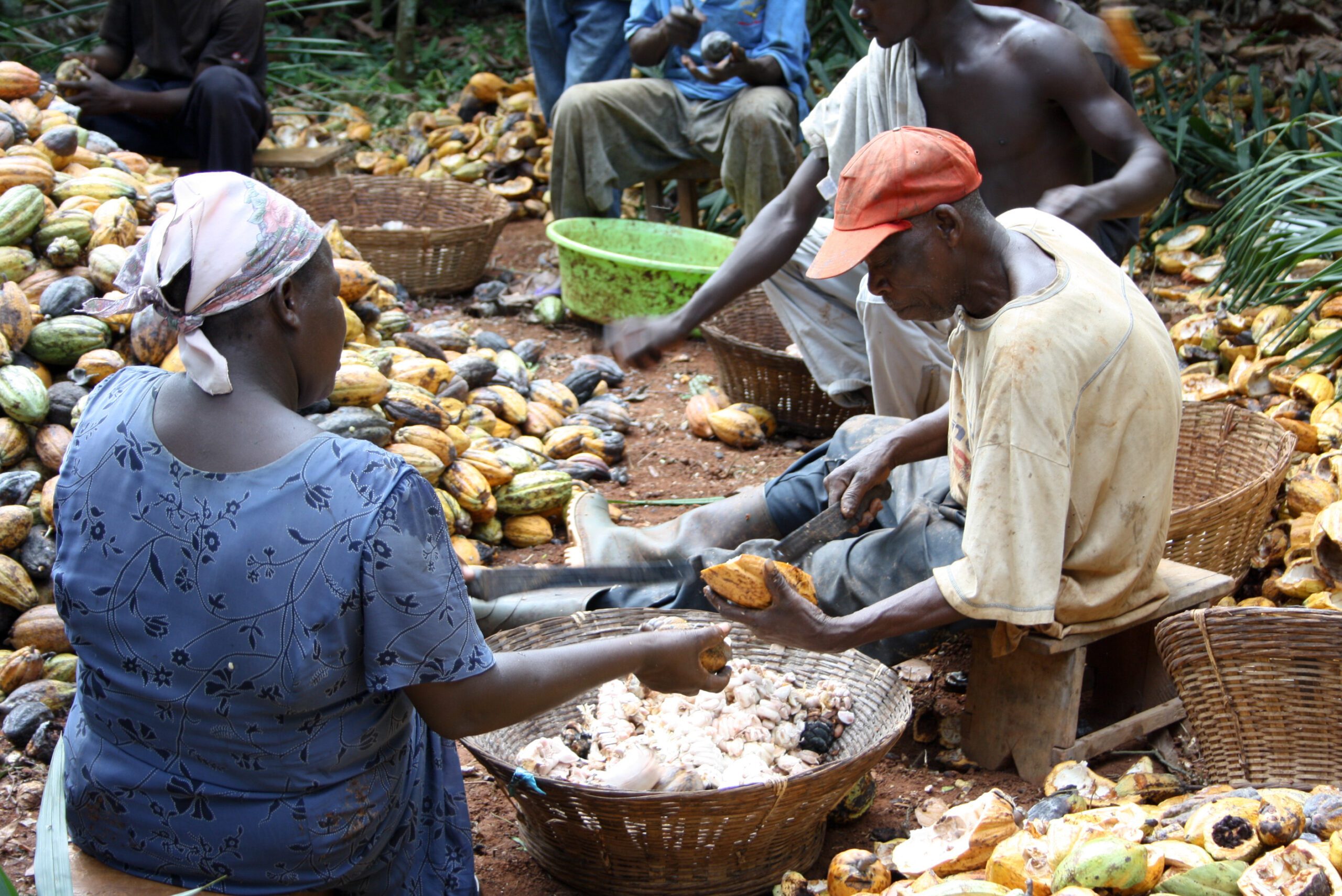 The income of the Cocoa farmer, which is already insignificant is further worsened if the farmer owns the land or not.

Farmers who do not own their land mostly engage in a landowner-farmer production-share agreement of either 50:50 (Worst case scenario) or 1:3 (Good case scenario).

“So, if the farmer is the 100% owner of the land, then the income which is already under the poverty line is wholly his/hers. But if the someone else owns the land, then in Ghana the practice is for the product to be shared using the 50:50 or 1:2 landowner-farmer output sharing ratio arrangement.”

So, let me do the math for you. The table below is our calculation of Income of cocoa Farmers per hectare of production and ownership of land and household size of 8.

This low-income situation affects cocoa farmers in diverse ways. These include but not limited to: Reliance on old cocoa technology, reliance on rainfall and lastly, an unfair phrase “Forced Labour” which western technocrats and industry players use in defaming the Cocoa farmer who is cheated in the value chain as a wicked man, when describing the labour management challenges the cocoa farmer face.

In my next article, I would demonstrate to you beyond the obvious, how these livelihood challenges are driven by the low income of cocoa farmers and perhaps convince you on why there is the need for us to move beyond cocoa beans price adjustments as a way of enhancing cocoa farmers livelihoods.

Kwame Asamoah Kwarteng (MBA, M.Sc., B.Sc., HND) is a Cocoa farmer’s son with expertise in international trade & policy, industrial policy, and project management with a professional focus on the Cocoa-Chocolate Industry and the digital economy. You may email me at kwame.kwarteng@policyCON.com / kwame.a.kwarteng@gmail.com if you need me to provide one-off or regular advisory services on any issue, risk or identified opportunity within the Global Cocoa-Chocolate industry.