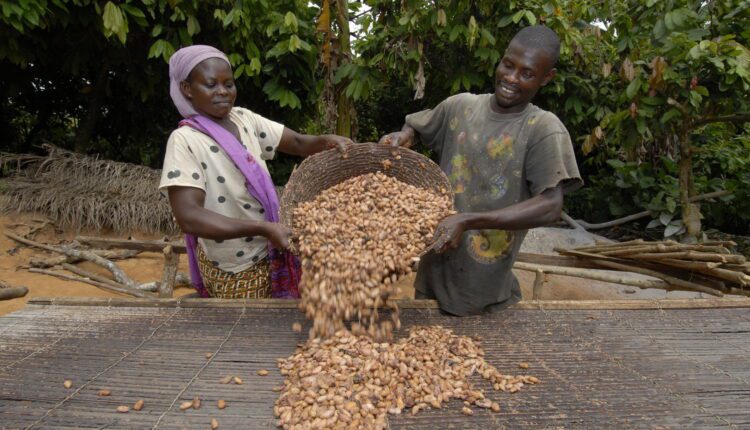 In my previous article on how much Cocoa Farmers earn and why we need to announce a Cocoa Emergency, we realised that household members of cocoa farmers individually lived on a daily income as low as US$0.17 / day when cultivating a two-hectare cocoa farm.

The issue of low income of cocoa farmers has been ignored for long to the extent that we use other demographic and psychographic factors like age, education, culture, etc. to factualise the reasons why farmers engage in certain unproductive activities to sustain their living.

This article would demonstrate how the low-income situation of smallholder cocoa farmers has influenced and continue to influence their reliance on old cocoa technology, rainfall for irrigation and what the west/academia regretfully defines as forced labour.

Cocoa technology in this regard refers to the stock of knowledge which includes skills necessary for the production, processing and marketing of cocoa. The need for the use of new technology became eminent since the 1960s when Ghana who was the largest producer of cocoa beans saw its production drop significantly by 60% due to a widespread pest and diseases, bad weather conditions coupled with low Producer price for the commodity.

However, due to the importance of Cocoa to Ghana’s economy, Cocoa Research Institute of Ghana (CRIG) developed new technologies one of which was “improved farm practices” that seeks to address the cocoa production problems in the area of poor agronomic practices, pest and diseases. However, despite the dissemination of these new technologies by CRIG to farmers to enhance production, productivity and subsequently increase their income, its adoption over the years remains very low. The reliance on old technology was raised by Riess (2012) as being responsible for 40% crop losses every year.

Some researchers recommend the need for financial organisations to provide affordable funding opportunities for farmers to adopt the recommended technologies. Even though farmers investment into these technologies with the assistance of credit may boost productions, it comes at an increased cost hence reducing its impact on net income generation. Farmers don’t control cocoa prices, and an increase in production also lead to a price drop in the commodity market.

The low-income situation affects farmers ability to buy the necessary equipment and hire the necessary labour to maintain the farm. Hence leading to farmers reliance on the use of old farming practices which tend to degrade and contaminate the soil and water they use in their farms. Cocoa farmers aren’t just earning low income, they are in a sector (Agriculture) whose harvest and productivity is highly vulnerable to changes in the climate and hence insurance firms disinterest in the sector.

The cocoa plant is very vulnerable to drought and the pattern of harvesting is linked to rainfall distribution. Within the year, cocoa farmers are faced with at least four months of dry weather which results in a deficit of water in the soil.

Due to the extreme low-income cocoa farmers earn, they are unable to invest in irrigation systems that are capable of supplying them the needed irrigation during this long dry season. This leads to increased mortality of cocoa seedling during the establishment phase.

At the growth stage of the plant, the water shortage lowers yield and increase the level of capsid damage to the plant.  The effect is that farmers are unable to generate high income due to the lower yields. What has been identified as a serious threat is that the western region of Ghana, which produces more than 50% of the national output is being faced with a 12.3% decrease in rainfall.

Farmers’ reliance on rainfall for irrigation leaves them at risk of low farm productivity. This further reduces their income. It isn’t just a major threat to farmers’ livelihoods but also a threat to the global supply of cocoa beans as forecasted by the International Cocoa Organisation (ICCO). This validates the call by ICCO for the industry to re-look at ways to improve farmers income to help them combat the issues of relying on rainfall.

Also, because the price of cocoa is influenced by demand and supply, the reduction in production has the potential of driving up price hence increasing farmers’ income. The bone of contention is whether the percentage increase in income due to the increased price can commensurate for the yield losses.

According to the international labour organisation, forced labour is simply defined as the performance of involuntary work by a person under the threat of any penalty. Per the definition, it has been estimated that 708,000 children were allegedly engaged in forced labour between August 2016 to August 2017 specifically at the cocoa sector.

As alarming as it may seem, what tends to be forgotten is that a cocoa farmer who usually has a household membership of 8, rely on US$2.69 a day when cultivating a two-hectare land. The farmers have no power at the moment to influence the distribution of value within the cocoa value chain. Which means that they can’t adjust wages for their labour or give them the incentives required and subsequently transfer it to their buyers as done by Chocolate manufacturers. Lower-income means farmers wouldn’t be able to hire the expected labour, pay them the expected allowances and in all treat them like how chocolate manufacturers, grinders and distributors do their staff.

This circumstance as described naturally drives the demand for cheap labour by the sector and creates an environment where labour exploitation is likely to exist. Smallholder farmers are often left with no choice than to either pull their children out of school or get them to work intermittently in the cocoa farms. This in effect denies the children access and rights to a peaceful and decent education, exposing them to longer hours of work and harsh chemicals.

However, the farmer’s refusal to engage the children in farming activities means productivity will go extremely down, and the entire household will have nothing to eat. This practice led to players within the value chain signing the Harkin-Engel’s Protocol to commit to eliminating the worst forms of child labour in the cocoa sector in Ghana and Ivory Coast as outlined in ILO conventions 182.

The Ghana government has signed on to various projects with the ILO to combat the worst forms of child labour in the cocoa sector. However, as Professor Genevieve Lebaron (2018) who researched into issues of Child labour in the cocoa sector in Ghana recommended; a redistribution of value within the cocoa-chocolate value chain needs to be looked at. As it holds the key to solving the root cause of the labour-related problems within the cocoa sector. This will then provide the morale grounds for governments and international regulators to enforce labour regulations and standards on smallholders cocoa farmers.

In my next article, I will justify why the cocoa-chocolate industry’s intentional preaching and provision of aid to support increased production as a means to enhance cocoa farmers’ income is flawed. The actions rather serve as a strategy to reduce cocoa prices at the commodity market. Leaving farmers in the hand of environmentalist who do not care and do not have time to understand the puzzle the smallholder cocoa farmers are locked in.